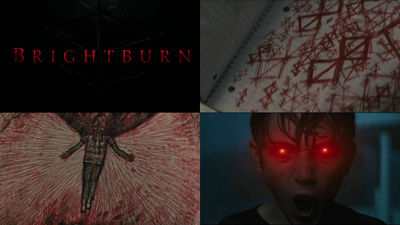 " BRIGHTBURN " is a new movie by James Gun who directed supervision and screenwriting in the movie " Guardians of Galaxy ", and directed production in the movie " Avengers / Infinity War ." Although BRIGHTBURN is a super hero who is good at director Gan, the hero has become a work of a new genre called " super hero horror " that will attack people by the power which exceeds human knowledge, and the evil one side of the hero is a glimpse The latest trailer is available online.


The movie starts from an evil eyes shining red.

The stage of the story is peaceful country town with no discrimination.

It is James Gun who will serve as a producer.

"Mother, who am I?" "A gift from heaven" parent-child conversation. It recalls the introduction part of movie ' Man of Steel ' depicting superman's birth.

The scene changes, mysterious light that fly from the night sky.

Something seems to have fallen on the ground and it is hit by a tremendous shock.

A pair of couple entering deep into the forest, concerned about the cause of the shocking faction. Elizabeth Banks will play Miss Brauner, David Denman will perform Mr. Brauner.

What a small baby I found there.

Then time will flow, and the little baby found in the forest will grow to a boy of elementary school age. A boy Brandon · Braier who is the protagonist of BRIGHT BURN is hitting a note of a unique form as if it superimposed "B" and the inverted "B" on the note. It is Jackson A. Dunn who plays.

Brandon can be bullied by that something is different from other children.

It will be knocked down to the ground roughly.

"He is creepy!" The girl says, but the teacher urged the teacher to say "You can wake me up ..."

I will offer my hand without any help.

Brandon grasped his hands. From the hands of the girls, "Mississippi" sounds like a bone crumbling, and the girl screams.

The scene changes and a woman accusing the boy's actions. She seems to be the mother of a girl whose hands were crushed, accusing the Braier couple violently.

The girl 's mother and Brandon' s eyes cross each other. Mother is obviously hostility towards Brandon.

The scene changes, Brandon gazes at the propeller rotating at high speed.

A big sound is heard with a bubble.

But Brandon's hand is intact, instead the propeller is bent and bent.

Brandon who saw this will give off his mouth.

I notice the surrounding irregularities.

That symbol that Brandon wrote on the note and hit the window.

Glass fragments stick into your eyes.

And the shadow of a mysterious mystery.

A woman who fears and flees into the room.

However, at the next moment a sturdy door will be torn up.

In the back is a small figure wearing a mask.

In the next moment, I will attack the woman rapturedly.

The scene changed again, the police came to Brandon's house.

Mother who finds something.

Something was stolen there.

The same figure as the mask that hit a woman is drawn.

In addition, an accident of a crash of an airliner occurred.

That symbol on the fragments of a crashing plane.

A boy who is protected for some reason. What on earth did you do ...?.

A silhouette stands in front of a car running in the dark.

The figure disappears in a moment.

It is Mr. Breyer who is the father of Brandon's foster ride in the car.

Mr. Braer who is frightened as "No! No!" Against silhouettes standing in front of the car.

And there is also a silhouette at Mrs. Blair's house.

I try to counter something invisible with a shotgun.

Mrs Braya who runs away.

I hide under the bed and overcome something.

The police officers who caught the crisis ... ...

Disappear in a moment before entering the house.

Something flying around the house.

What is going on behind the line of sight of Mrs.Bray.

"BRIGHTBURN" is scheduled to be released nationwide on May 24, 2019, but the publication schedule in Japan is undecided at the time of article creation.