Thirty percent of e sports fans turned out to be female, and female professional gamers are also increasing worldwide " E Sports " enjoying competing in computer games with a lot of prize money and enjoying watching the state is gradually spreading in the world and even in Japan, which is a game power country "professional gamer" as occupation It is being recognized. It is reported by VentureBeat that women's fans accounted for 30% of all e-sports fans who show such excitement, and their proportion is increasing year by year.

According to the market research firm Interpret , the proportion of women among e sports fans was 30.4% in the fourth quarter of 2018. Since it was 23.9% in the period of 2016, it is 6.5 points increase in 2 years. Also, at e sports title players, 35% were female. VentureBeat says, "Given that men have been heavily used in both e-sports fans and professional gamers over the last six to seven years, this change of 6.5 points is a big leap forward." The figure below shows the ranking of the female players' activity ratio, which is obtained by "percentage of female players / proportion of male players × 100" in major game titles. The higher the number, the more active the women are. Also, purple numbers are titles for PCs and consoles, and green numbers are titles for mobile. Although titles for PC / console such as " Dota 2 " " Counter-Strike: Global Offensive " " League of Legend " are low scores, in casual games for mobile such as " Cookie JAM " and " Candy Crush Friends Saga " The proportion of female players exceeds majority. 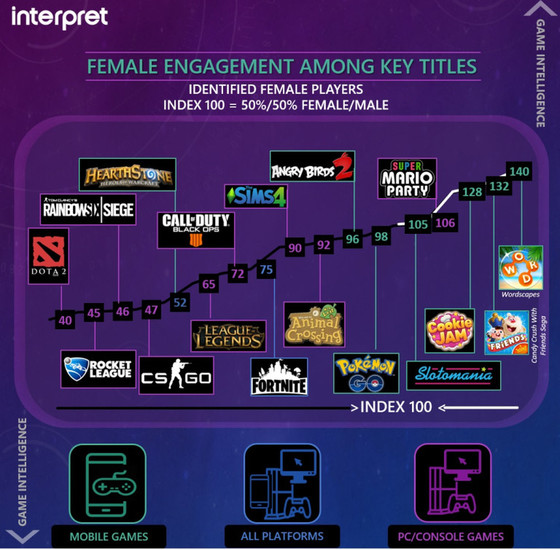 According to Skillz , a platform for mobile e-sports, seven out of the professional gamers who won the top 10 tennis tournaments in Skillz in 2018 were female, and in total a total of 800 It seems that he earns 10 thousand dollars (about 900 million yen). Jennifer Park who was active in the name of "jpark 87" and whose name was ranked eighth, said, "The prize money I got from Skillz has been devoted to the tuition fee till the graduation of the university I am going through." Tia Christianson, Vice President of Europe for Interpret said, "If women's fans gained an additional 6% share after two years, the number of e-sports fans will be close to the popular gender ratio for traditional gamers "The role of women's role in e-sports will expand and further progress will be expected as a result of efforts by some industry leaders, perhaps women show further success It may be a new sports title as an e-sports, as released for mobile and tablet devices, rather than titles played on PCs such as 3D shooting games and real-time strategies and home game machines. "