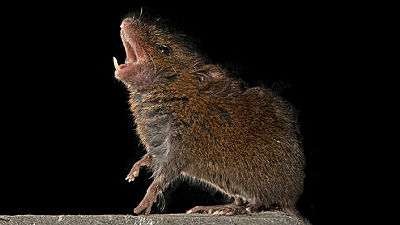 The Songs of Singing Mice May Help Unlock How the Brain Processes Conversation | Technology Networks
https://www.technologynetworks.com/neuroscience/news/the-songs-of-singing-mice-may-help-unlock-how-the-brain-processes-conversation-316156

The human brain encodes information contained in other people's speech and responds instantly to it. A monkey called marmoset takes communication like a human in a style that turns speakers in turn, but the exchange is a slower speed than human.

However, as a mouse called "Alston's singing mouse" can perform complicated conversation at a fast speed, researchers at the New York University Medical Center have investigated the function of the brain. Alston's singing mouse's male sings songs when attacking enemies and female mice, but this behavior is largely different from other mice, according to Associate Professor Michael Long, the lead author of the paper. A typical lab mouse generates a short, disordered, ultrasonic sound, but Alston's singing mouse can emit a structural signal that allows the other party to identify the speaker, its voice is about 100 It is relatively long generated from the tone.

You can check the audio of Alston's singing mouse from the following movie.


Researchers conducted a survey using a method called "electromyogram examination" that detects electrical signals generated when the brain attempts muscle contraction. As a result, it turned out that mutual audio exchange performed by Alston's singing mouse consists of two parts, "sound production" and "sound adjustment". According to researchers, the voice adjustment is in charge of the mouth facial motor cortex (OMC) of the brain, and the voice production is done in other parts. When the research team stimulates OMC, the vocal folds of the mouse responds and it is shown that if you cool the mouse OMC in the middle of singing in a safe way, you can lower the speed of the song without changing the tone color and tone It is said that it was done.

In addition, even if the researcher administered a drug that completely inactivates OMC to the mouse, the mouse could sing. In other words, it was shown that OMC is not a part making voice.

It is the first time this research proved the mechanism of speech adjustment in mammalian brain. Arkarup Banerjee, coauthor of the paper, said, "By separating voice production and voice adjustment, the brains of the singing mice will be able to closely control the voice, like human conversation, bird duet, cricket interaction, We have evolved into this. " Human utterances are much more complicated than mouse interactions, but researchers believe that using the research of singing mice, they can ultimately study the utterances of people with communication disorders. Many people have communication disorders due to brain injury or autism, but as of 2019 the mechanism of what communication is possible is not yet understood. "By studying Alston's singing mouse voice communication that you can talk at a fast speed like a human you can create a platform that can discover the mechanism of the whole brain leading to the treatment of future diseases," said Long Associate Professor It was.