Education is also an important issue in various countries, with decades of research and hundreds of millions of dollars on budget. In the United States where various races are crowded, there are many educators holding a stereotype "There is an academic gap between races", while researchers at Indiana University have more than 15,000 students and 150 faculty members We conduct a large-scale survey on the subject and argue that "if the teacher has a stereotype, it greatly affects the motivation and the results of the student."

Just because a teacher has a stereotype "There is a discrimination gap between races" means that "a racist teacher obviously wants to give pupils" There is none. However, studying the possibility that the fixed idea that the teacher's stereotype "there is a limit to the growth of the students no matter how advanced education is done" affects student motivation to learn, and the students will kill the growing buds The team points out. Therefore, when the research team conducted a questionnaire survey on all the faculty members of the STEM (Science, Technology, Engineering, Mathematics) course at Indiana University, 150 professors and faculty members in charge of 643 courses responded. In this questionnaire, in addition to the question as to whether or not to have a stereotype, the experience and ethnicity of teachers were also investigated. In addition, the research team gathered the performance data of more than 15,000 students who attended the classes that the faculty who responded to the questionnaire was responsible, and at the same time gathered "students' feedback evaluation" anonymously from the students.

The following graph summarizes the average score of the student group (left: Fixed) of the teacher with stereotypes and the student group of the teacher who does not have (right: Growth) in a bar graph. The gray bar graph shows the average results of white and Asian students, and the black bar graph shows the average grades of students of minority ethnic groups such as Latin American-Americans, African-Americans, Native Americans. In the Fixed group, the results of ethnic minority students are on average 0.19 points lower than those of Caucasians and Asians, but in the Growth group students the academic gaps were down to 0.10 points. 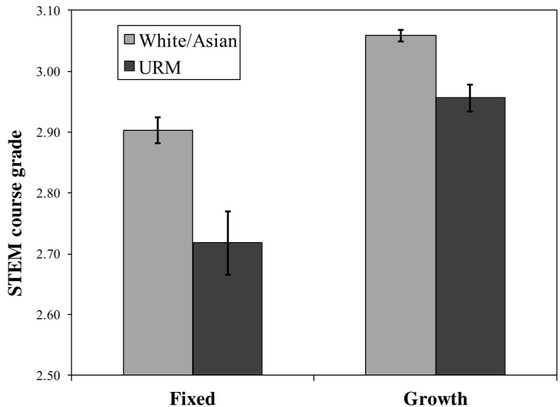 In addition, from the questionnaire result of the student, it was found that teachers with fixed ideas rarely "focus on student's learning and development" and that education with little motivation is done. I found that on average, all students, especially ethnic minority students, were less motivated.

The research team says, "In the class of teachers with stereotypes, the gap of achievement is bigger among races than the class of teachers who do not have fixed ideas." Furthermore, the research team stated that "There was no significant difference between the classes due to other factors such as the teacher's experience, position, gender, ethnicity, etc.", "The teacher's way of thinking and ideas are classes It suggests that students' motivation and achievement feelings will be formed. " Ars Technica received this research and said, "If teachers decide to abandon the fixed idea and adopt a way of thinking that expects more growth to the students, education will be more effective and the student It will be a very big benefit. "