The fifth generation stealth jet fighter " F - 22 Raptor " born by Lockheed Martin is one of the main air fighter 's main fighters. However, in 2011 the production has ended, so procurement of parts to be replaced by maintenance is becoming difficult. For this reason, the US Air Force is experimentally introducing a plan to output and procure parts of fighter aircraft with metal 3D printers.

The US military is showing a posture to actively apply the latest technology to the forefront of the military, including Marine Corps developing technology to construct barracks with 3D printers and ready-mixed concrete in 24 hours. 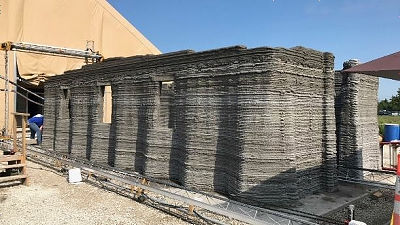 And it seems that the use of the parts output by the metal 3D printer is becoming commonplace in the maintenance of the 5th generation jet fighter plane . In December 2018, the 574 aircraft maintenance team at Hill Air Force Base in Utah installed parts molded with metal 3D printer on F - 22. According to Robert Lewin, Director General of the 574th Aircraft Maintenance Corps, the number of parts is smaller in the F - 22 with a smaller fuselage size, and the difficulty of obtaining parts is increasing year after year. When requesting production from the factory, only a single number can be produced, so the minimum order quantity is required and the cost will rise. Meanwhile, metal 3D printers installed at Hill Air Force Base will mold parts from lamination of titanium powder using laser. With a metal 3D printer, it takes only 3 days for new parts to be completed and reach the site. With 3D printers, not only maintenance expenses but also maintenance time can be greatly shortened.

The following image is the interior part of the cockpit actually exchanged at Hill Air Force Base. The top is made of aluminum, the bottom is made of titanium outputted by 3D printing. Since parts made of aluminum cause corrosion, parts of this interior part of the kick panel are one of parts that are often exchanged. At the Hill Air Force base, at least five of the F - 22 parts are outputted as 3D printers. Maintenance using this series of 3D printers means that the US Air Force will be a pilot operation for introducing metal 3D printing technology through public-private partnership. Robert Blind, Modification Manager for Lockheed Martin says, "If the more complicated parts can output with 3D printers, the possibility that the time taken to develop fighter aircraft will be reduced by 60 to 70 days I have a comment. "