'We are Ultraman', the figure of the animation 'ULTRAMAN' where the son of the founder Ultraman fights with an Ultraman suit is extremely well reproduced 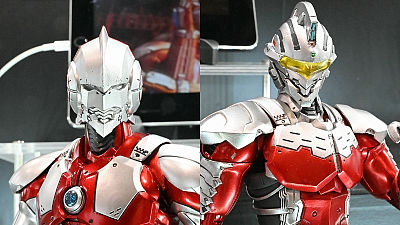 'ULTRAMAN' ( Seimizu Shimizu x Tomohiro Shimoguchi), serialized in the manga magazine ' Monthly Heroes ', is set a few years after Ultraman left Earth. A high school hero, Shinjiro, who is the son of Hayata Shin who was the first Ultraman, knows his destiny, who inherits the power of legendary hero, and wears an Ultraman suit to fight against evil. I draw Ultraman as. The cumulative number of circulations up to 12 volumes has surpassed 2.8 million copies , and from April 1, 2019, NETFLIX has also decided on simultaneous global exclusive distribution .


And Kore discovered figures of 'ULTRAMAN' in three dimensions at the Good Smile Company booth of Onefest 2019 [Winter]. ULTRAMAN SUIT (Anime Version) ', scheduled to be announced in March 2019 on 1/6 scale, price is $ 139 (Yen price is undecided), and it is truly worldwide simultaneous exclusive delivery at NETFLIX, I feel that. threezero . The kind of blade in both arms is a battle weapon, the cesium blade that uses cesium. By combining with the cross, it is also possible to emit certain rays from the left arm. The color timer emits red light by releasing the limiter. Known as the 'Seven suit', it is a design based on Ultra Seven. Of course, it is also equipped with various weapons.