Complete the “HUNTER x HUNTER” match game “Netero President vs. Melem Battle” with overwhelming force into a diorama figure, “I'm grateful I've met you and you've met you so far!” 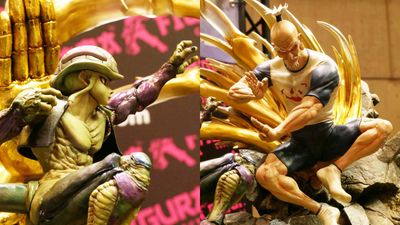 Scale figure production and engaged in the design

Figurama Collectors from, a very popular work 'by Yoshihiro Togashi HUNTER × HUNTER name game of' ' Isaac = Netero chairman vs Meruemu ' diorama figures of the works in overwhelming force the game is Wonder Festival 2019 It was exhibited in [Winter] .

The match between Netero and Melem, reproduced on the 1/6 scale, is 76.2 cm high, 69.9 cm wide, and 64.3 cm deep. The figure that glows golden under the light is such that people on the road will stop their feet unintentionally. Kannon , which is the net ability of the Netero President. Even now, they cut off a moment of tension that seems to be mixed. I am looking at President Netero from below with a sharp eye. The long tail, which is also a distinctive weapon, looks like a whip. On the other hand, the president of Netero is in the style of T-shirts and foot bags on the raised muscles. The look that appears to be closing the eyes makes you feel that the mind is sharpened. Also, the Figurama Collectors team has correctly translated the names of Netero and Melem into hunter characters and embellished them on the base of the diorama figures. You can see the amazing heat of the production team.

HxH Alphabetic Base
Worked Closely With We The Licensers In Order To Accurately Translate Both Netero'S And Mereum'S Names From Japanese Into The Hunter X Hunter Alphabet And Then Used The Unique Symbols To Embellish The Diorama'S Gilded Base.

As an example of the hunter character so far, in the case of Gon Krapica Kirua Chloro Hisoka, it is written as follows. When going around to the back of the figure ... Army ', a board game that appeared in HUNTER x HUNTER, was hidden. In addition, Figurama Collectors will start pre-booking of diorama figures on the official site from Monday, February 11, 2019 (Monday).