Twitter is showing the number of active users on a first-come-first-serve basis in a settlement report, unexpected figures adversely affecting stock prices 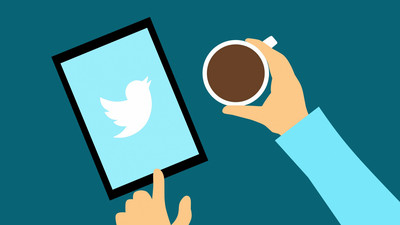 Twitter has not disclosed the number of daily active users (DAU) that use the service everyday, but instead published the number of active users (MAU) per month and its rate of increase. However, due to the recent decline in MAU due to mass deletion of counterfeit accounts, I disclosed DAU for the first time in investor's "Quarterly Results for the Fourth Quarter of the Year" for the first time.

Twitter finally shared how big its daily user base is - and it's a lot smaller than Snapchat's - Recode
https://www.recode.net/2019/2/7/18215204/twitter-daily-active-users-dau-snapchat-q4-earnings

According to Twitter, "Twitter user who logs in and authenticates on a specific day through Twitter.com or a Twitter application displaying advertisements" is subject to "Monetizeable number of daily active users (mDAU)" It was said that the measurement was done with.

As a result, the average mDAU for Twitter in the fourth quarter of 2018 was announced to be 126 million people. The breakdown is that there are approximately 27 million mDAUs in the United States and 99 million mDAU outside the United States. In addition, the average mDAU for the third quarter was 124 million people, which is 9% higher than the same period last year in both periods. Also in the body of the report, 120 million people in the first quarter and 122 million people in the second quarter are appealing that mDAU is growing by several percent throughout the year. 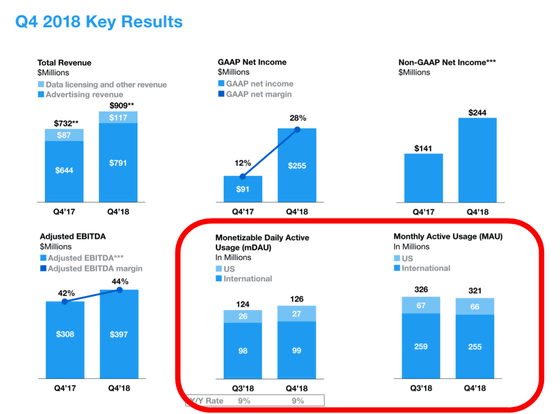 Meanwhile, the MAU in the third quarter of 2018 showed a declining trend of 322 million, 321 million in the fourth quarter of the same year. Also, I found that it is about 39% of Twitter's monthly active users to access Twitter every day. Recode from overseas media predicts that Twitter has changed its route so that it focuses not on the MAU that is on a downward trend but on mDAU that shows even a small growth in order to show that Twitter is growing It is. In fact, it says that Twitter is planning to cease publishing the MAU from 2019.

Recode also evaluated that Twitter's mDAU was considerably less than expected. In addition, it points out that Facebook is 60 million fewer than Snapchat, a photo sharing application, of course. 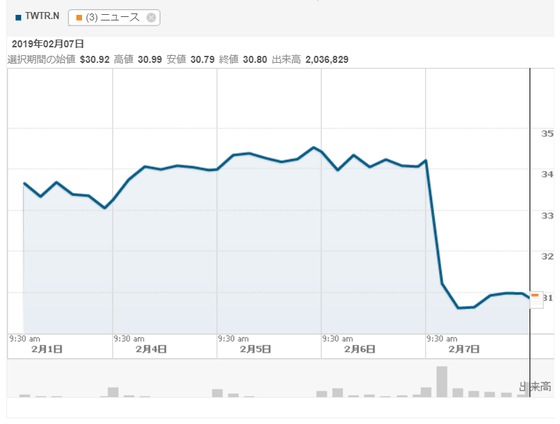 However, Twitter only released "monetizable" DAU, and users using Twitter using a client application that cuts advertisements informally are not included, so Twitter and Snapchat Recode says it may not be fair to directly compare DAUs. There is still room for growth on Twitter and Twitter expects that existing users may be encouraged to log in to Twitter more frequently in order to extend advertising revenue.