IRobot , a manufacturer that develops indoor cleaning robots ' Rumba ' and ' Brava ', has announced a robotic lawnmower " Terra " that fully automates garden lawn mowing. Terra says that using smart mapping technology also installed in the Rumba will grasp the shape of the garden and its position and mow lawn and can set schedules and no-entry areas in cooperation with smartphone applications .

You can see how Terra actually moves from the following movie.


Terra's body looks like this. Unlike the rumba, it has a square shape, with two large rear wheels and an antenna. To have the Terra mow the law, first place a beacon around the garden. Furthermore, when Terra is operated so as to go around the garden, mapping is performed based on the beacon, and then Terra will automatically mow lawn. The beacon is battery-powered, and its exchange cycle seems to be about one year. Terra can link with smartphone's iRobot HOME application, and users can set mowing depth and operation schedule from smartphones. In addition, the Imprint smart map function which is built also in Rumba i 7 + is also adopted by Terra. Terra creates a layout in the garden with a sensor and a built-in camera, mowing lawn based on linear movement while grasping the place where you are, and all the harvested turf will inhale like a rumba. Also, like rumba, it seems to go back to the base and charge before the lawn mowing is over when the remaining battery charge becomes low. Just like rumba, Terra changes its direction and continues to work when it hits an obstacle such as a wall. For locations where there are no obstacles such as flower beds and roads, it seems possible to deal with by marking the no-entry area from within the application. In addition, it is said to be making it robust to operate even in bad weather. IRobot announced the rumba in 2002 and established the genre of fully automated cleaning robot petitioned for legalization of the outdoor beacon navigation system to the Federal Communications Commission (FCC) in 2015. In response to this petition from the National Radio Astronomical Observatory, it is claimed that "movement of the telescope is hindrance", but because permission has been given in terms of signal strength and restrictions on use in residential areas, I was rumored to give out a full automatic lawn mower robot. " Robomow's " Robomow " and Honda's " Miimo " have already emerged from lawn mower robots from competitors, so attention will be paid to how Terra will be on the market. 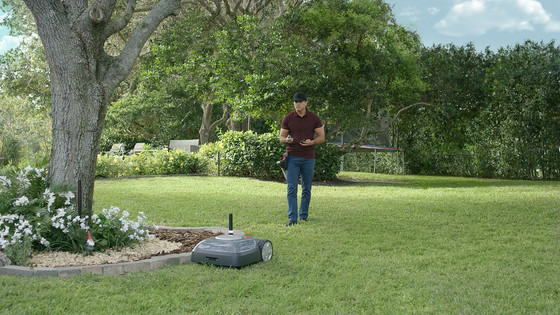 According to iRobot, Terra is first released in Germany in 2019 and then beta test in the USA, concrete price and shipping time will be announced at a later date.