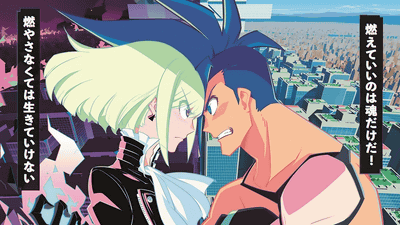 The 2nd PV of the first original theatrical animation movie " Promer " to be sent by director Hiroyuki Ishihon and screenwriter Nakajima Kazuki, who has worked on TV animation " Tengen Toppa Gurren Lagann " and " Kirakirakiru ", has been banned.


In PV, there is a brave Gallo getting into a machine based on red and white color and wielding weapons like "Masui" and Rio of [Vernish] manipulating brilliant flames in black armor.


On the Great Flames of the World - It was the emergence of a race [Vernish] that manipulated the flame that was born by a mutation that triggered that unprecedented situation where half of the whole world was destroyed. Thirty years since then - some aggressive parties claim [Mad Vernish] and attack the world again. A new member, Gallo and Leader · Rio of [Mad Vernish] with a blazing firefighter of a high maneuver life-saving fire brigade for burnishing [burning rescue]. The ending of the two fights, where hot souls collide, is -. A new visual is also lifted according to PV 2nd bullet. It is drawn that Rio and Gallo face each other. Each cast, and now Mr. Ishiro Nakajima's comments are as follows. It is no doubt that it will be a work of thermal explosion.

Gallo role · Matsuyama Kenichi:
I played hotly and pleasantly as much as I can not defeat Gallo. Please experience this powerful action of this hot guy and the human drama at the cinema by all means!

Rio role · Taro Suotome:
The movie has become a piece full of heat from the beginning. I can hardly wait for completion as well! Please look forward to the public in May!

Mr. Masato Sakai role as clay:
My actor Primepolis' s clerk, Clay is a man behind Gallo [Burning Rescue]. But ... I can not say any more yet (laugh).

Screenplay / Mr. Kazuki Nakajima:
Mr. Matsuyama, Saotome, Mr. Sakai are the people who understand the unique rhythm etc of <Theater company ☆ Sensing Line> I am writing the script so the first hope passed! It is a feeling (laugh). Mr. Matsuyama was also glad because he was originally viewing "Gurren Lagann" etc and talking "I love you!"! I am really looking forward to completion.

The movie 'Promere' is a nationwide road show in May 2019.