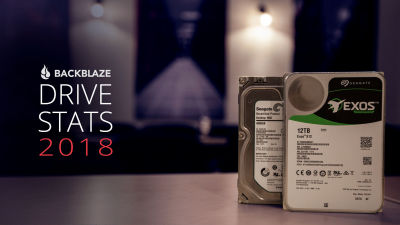 Backblaze , which provides cloud storage service, announced the 2018 full year version of failure rate (error rate) data of data storage hard disk (HDD) of the storage center operated by its own company. The model-specific data of more than 100,000 operational HDDs are released, which shows the tendency of failure rate well.

At the end of 2018, HDDs that operated as Backblaze's data storage were 100,4554. The results excluding 45 units used for testing purpose are as follows. The average annual failure rate (AFR) of all HDDs in 2018 was 1.25% on average, exceeding the previous year, and it was said that overall solid performance was obtained. 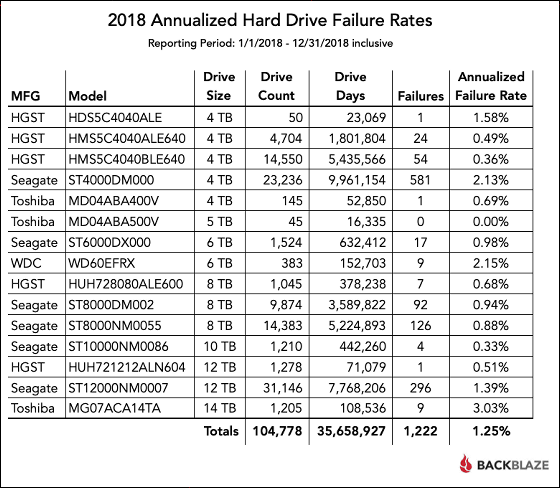 In the story limited to the fourth quarter of 2018, it was finally told that the Western Digital (WD) 4 TB model was completely removed. In addition, HGST HDDs with a reputation for reliability continue to produce very good results, 1,200 units of 12 TB model (HUH 721212 ALN 604) were added in the fourth quarter, and errors were only slightly one time in operation for about a month He seems to be showing a smooth start. Another 12 Toshiba helium filled perpendicular magnetic recording type 14 TB model (MG 07ACA 14 TA) was added in the fourth quarter. Although the initial AFR exceeds 3%, this is similar to other models, and we expect that the AFR will decrease as the drive stabilizes.

The year 2018 HDD failure rate is compared with past results as follows. As you can see from the transition to the large capacity model, the AFR has been shifting to a better result. Although the average HDD capacity per unit until 2016 was 4.5 TB, it increased to 7.7 TB in 2018, and the transition to a large capacity model is progressing steadily. And with the introduction of the large capacity model, the AFR is declining, so the trend of "high reliability of large capacity models is high" is ongoing. Among them, Seagate's 10TB model (ST10000NM0086) seems to produce very good results with a year-to-year year of 2018 and AFR of only 0.33%.

Finally, for all the HDDs operated by Backblaze by 2018, the total movable AFR throughout the period from the start of operation until the end of 2018 is as follows. In addition to the amazing stability of HGST which achieved less than 1% in all models, we can see the reliability improvement of Seagate 's large capacity model. In the past few years, HDD made by WD seems to be unavailable at affordable price, so it seems that WD HDD is disappearing from HDD for storage of Backblaze leaving 6 TB model. 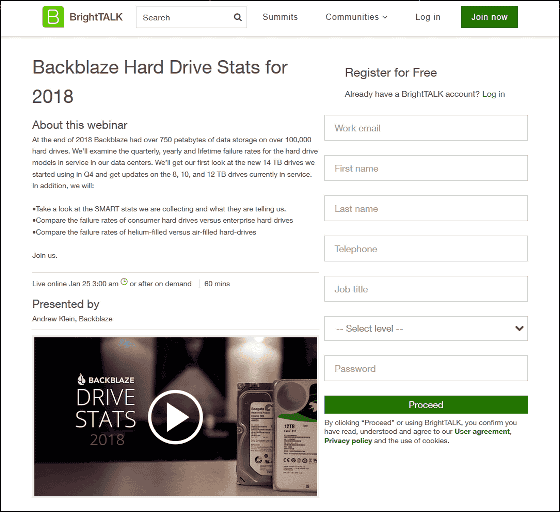