In 2009 Illinois state in the United States legitimized to install gambling machines operated by machines, other than human dealers, outside the casino. Since then, the number of gamble machines steadily increased, so it was expected to increase tax revenues. ProPublica Illinois, however, asserts "Increasing the number of installed gambling machines is a waste of money" based on state financial records, data and testimonies.

How Illinois Bet on Video Gambling and Lost
https://features.propublica.org/the-bad-bet/how-illinois-bet-on-video-gambling-and-list/

Gamble machines using monitors and computers such as video poker and video slots are rapidly spreading. Unlike traditional gambling that can not be played without special equipment and dealers, it is possible to play anywhere as long as you place a machine, so it can be installed not only in casinos but also in taverns and bars overseas. However, there are areas where the law prohibits installing in places other than casinos. In the past, the gambling industry, where the stage was limited to casinos, changed greatly with the advent of gambling machines. In the state of Illinois, except for Chicago where gambling is prohibited in local ordinance, "Video Game Law" which approves installation of gambling machine outside casino is established. After being legalized, more than 30,000 gamble machines were installed as of November 2018. This number seems to be larger than Nevada State which has Las Vegas known as the world's largest gambling city.

Background to the fact that when gambling machines were legalized in Illinois in 2009, $ 31 billion (about 3.4 trillion yen) was needed to improve state infrastructure. Illinois has issued billions of yen state bonds in anticipation of expected incomes within several months after the legislation allowing the operation of gambling machines has been established. According to the document, the Illinois State Assembly predicted tax income of 300 million dollars (about 33 billion yen) annually by the establishment of a gambling machine.

On the other hand, it can be seen that the light green planned revenue shown in the graph below shows real revenue and dark green shows the actual revenue and did not meet the profit forecasted by the assembly at all. In addition, tax revenues from casinos, which were valuable sources of revenue for the state, decreased significantly from $ 462 million (about 51 billion yen) to $ 393 million (about 43 billion yen) between 2013 and 2017. As a result of that, Illinois's education budget has declined by as much as $ 70 million (about 7.7 billion yen).

The cause of the failure is not the introduction of the gamble machine itself. There are states outside the state of Illinois that allow for the installation of gambling machines other than casinos and other provinces are well earned.

The table below summarizes the population of the state legalizing the gambling machine, the number of installed units, the number of installation locations, and the tax rate on sales. The tax rate imposed on the sales of gambling machines in Illinois is 30%, of which 25% are going to Illinois and 5% to local governments. However, ProPublica Illinois says that the rates for West Virginia and South Dakota are 50%, Pennsylvania is 52%, Oregon is 73%, and the Illinois state rate is too low. 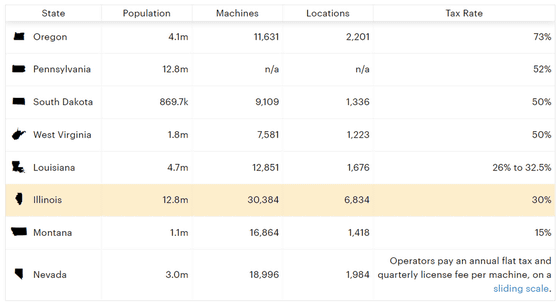 Propublica Illinois insists that the provision of the video game bill is the Illinois State Gaming Machine Operator Association that the cause of the Legislature's disappointment lies in insufficient scrutiny of the tax rate specified in the bill doing.

It is regarded as a strong lobbying activity by the association that boosted legalization of gambling machines. In the year 2010 when the video game law was established, the amount of 130 thousand 1205 dollars (about 14 million yen) was donated from the gambling machine industry as political funds. In addition, ProPublica Illinois points out that J & J Ventures, one of the machine makers, has donated 600,000 dollars (about 66 million yen) to the state. ProPublica Illinois insists that "rushing to legalize video gambling in hope of quickly generating tax revenues quickly ruins the state's finances." "We will continue seeking to increase income without reducing taxes and expenditure and will repeat the same mistakes unless there is discussion about gambling's social cost."