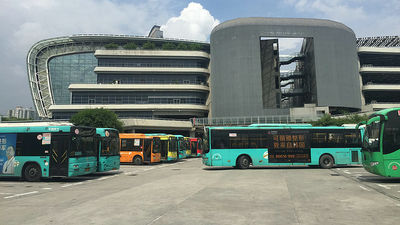 The bus in Shenzhen began operation in 1975, and as of 2018 when the population exceeds 12 million, there are close to 1000 routes. Diesel engine buses have been in operation for a long time, but as the noise and air pollution were so terrible, the government promoted transportation electricity. When purchasing an electric bus that buys about 1.8 million RMB (about 30 million Yen) with one unit, taking measures such as making most of it available with subsidies, all 16,000 buses running in the city I converted it to an electric vehicle.

In the city, 40 thousand chargers were installed, and in Shenzhen Bossi group responsible for some of the bus lines, they set up their own charging facilities at 180 sales offices. For sales offices located in Shenzhen Futian District, 20 electric buses can be charged at the same time. Charging time is 2 hours, because it can run 200 km with 1 charge, it seems that there is no problem in the range of the business route. In this way it can be said that "China is a one-party dictatorship system", but in reality the infrastructure facilities have not kept up, according to the deputy head of the Shenzhen group Vice President Joseph Mah Besides, it is borrowed from the city authorities and the private charging facilities and it operates.

Already, following the bus, a taxi will be replaced by electric car at the end of 2018. Taxis of Shenzhen Boston group alone is only 4,600, and Shenzhen is a total of 22,000 taxies will be replaced at once in electric cars . It seems that taxi drivers are already competing for charging facilities because charging facilities are short as described above.

In addition, consideration to the environment of public transportation is planned even outside of Shenzhen, and in London, all two-story buses will be hybrid cars by 2019, all non-two-storied buses by 2020 I plan to replace it with a pollution car. In New York it is planned to turn all buses into electric vehicles by 2040.