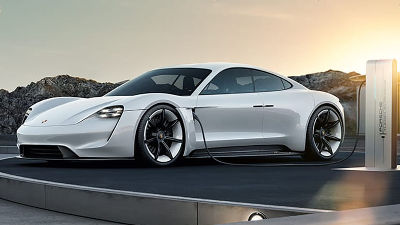 Intermediate results of the detonation velocity of 450kW, which is jointly developed by Porsche and BMW rapid charging system "FastCharge" has been announced. The prototype FastCharge system has already produced good results, and general use began experimentally.

Ultra-high-power charging technology for the electric vehicle of the future
https://newsroom.porsche.com/en/company/porsche-fastcharge-prototype-charging-station-ultra-high-power-charging-technology-electric-vehicle-16606.html

In the FastCharge project that began with Siemens, BMW, Porsche, Allego, Phoenix Contact E-Mobility and others joining in July 2016, a Fast Charge charger compatible with charging to a 400 V 800 V battery system has been developed, Ultra high-speed charging of 450 kW is standardized. Because CHAdeMO in Japan is 150 kW and Tesla's supercharger is 145 kW, FastCharge achieves overwhelming charging speed that is three times faster than rival.

The FastCharge research consortium set up a prototype of 450 kW charging station at Jettingen-Scheppach, near the German A8 motorway. The charging plug standard is compatible with the EU standard type combined charging system (CCS), and it can be used free of charge at the time of article creation. This time, demonstration of fast charge was demonstrated by EV "Taycan (Taikan)" released in 2019 by Porsche at Fast Charge set up in Germany, and it was said that it succeeded in fast charging at 400 kW. This is "It is possible to run 100 km with charging for 3 minutes", which seems to be said to be a level that greatly improves the disadvantages of EV, which had been pointed out as a difficult point of charge compared to gasoline. The Audi E-Tron can charge 150 kW, Jaguar's I-Pace can charge at 100 kW. Although the standard competition of the charge plug of the EV car is being activated, FastCharge seems to build a big lead with weapons of overwhelming fast charging speed of 3 times that of the conventional technology. However, the fundamental problem of how to procure electricity to charge all EVs and send power to each charging station is unsolved when the EV gets popular in earnest.