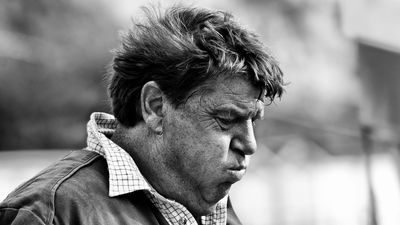 An amazing case of an American man who was brought into the Intensive Care Unit (ICU) by end-stage cardiac disease "Spit out a mass of blood clustered in the shape of the bronchus" was reported.

How a Huge Blood Clot Took the Shape of a Lung Passage - The Atlantic
https://www.theatlantic.com/health/archive/2018/12/bronchial-blood-clot/577480/

Georg Wieselthaler, a surgeon at the University of California San Francisco, said he was in the treatment of a 36 - year - old man who had serious heart disease. Due to the disease the mental heart function was very weak, Mr. Wieselthaler connected to a ventricular assist pump which pumps male blood to the body. There seems to be a disadvantage that the type of ventricular auxiliary pump used for this procedure has the risk of blood clotting in the patient's body being increased. Wieselthaler says, "For patients using this ventricular assist pump, it is necessary to administer anticoagulant to keep blood from clotting."

Actually, Mr. Wieselthaler administered anticoagulant, but there is a disadvantage in the effect that blood does not clump easily. When the blood flows out of the blood vessel due to the occurrence of a crack or the like in the human body, blood coagulates to make a scab covering the tear, so that the outflow of blood stops. However, in the case of a person receiving an anticoagulant, there is a danger that blood does not solidify and the blood flows out more and more from the rift.

The patient that Wieselthaler was in charge of this time also said that blood flowed out of the pulmonary vessels and entered the bronchi. At first, the patient cough for several days and spit out a small blood mass. However, a patient who had been intensely coughing for a longer time than usual said she had spit out a huge blood mass. Wieselthaler and colleagues expanded the lump of blood that was folded carefully, and Wiselthaler said that the blood mass held firmly the shape of the bronchi. 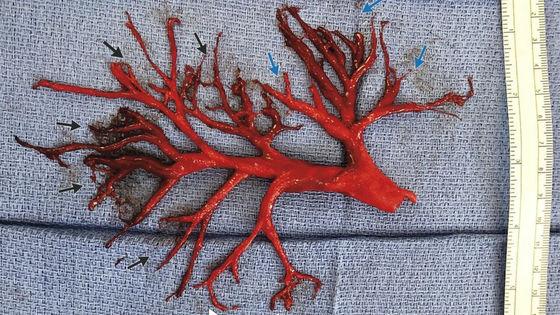 The case where bronchial-shaped objects are exhaled is extremely rare, but it does not mean there is no precedent at all. In 1926, there was a report that a woman infected with diphtheria had exhaled a bronchial-shaped membrane piece of the lungs, and in 2005 a case of pregnant women who breathed out small bronchial clots It has been reported.

However, in general, the phenomenon that blood which is less sticky than lymph and so on is coagulated and is discharged while maintaining its shape is rare. The mass of blood that men exhaled this time is actually 15 cm in size, and if it is normal it should be broken in shape before being exhaled or being exhaled. Wieselthaler therefore considers that fibrin , a protein involved in blood coagulation, may be the key to explaining the phenomenon, as to why blood clots have been clotted cleanly.

Patients' men presented with various symptoms related to heart disease, etc. There were also symptoms that fibrin concentration in the blood was higher than usual. There was a possibility that blood accumulated in the respiratory tract solidified in a rubbery state, and it was spit out with cough while maintaining its shape. According to Mr. Wieselthaler, the man temporarily felt better after breathing out the blood clot, but since she was clearly in the terminal stage, she was said to have died of complications of heart disease one week later.