The Apple Store staff has 'words that should not be used' 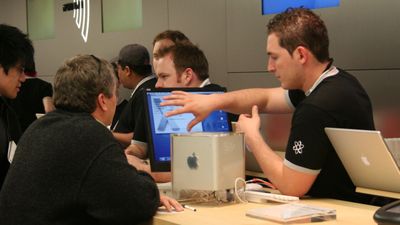 The Apple Store is a distributor and technical support base directly managed by Apple. Apple Store has over 500 stores in 24 countries at the time of article creation and 9 stores in Japan. The Guardian reports that "a word that should not be used " is defined in the manual distributed to the support staff working at this Apple Store.

When Apple 's product is broken, the Apple Store staff is not just receiving a repair or exchange fee from a customer, but is required to restore trust while making customer feelings positive. They are trying to produce the Apple Store with the aim of "humanizing and brand-controlling Apple's brand image."

Mr. Johnson himself interviewed himself, pulled out the cheerful staff who worked at the competitors' stores, and had the opening staff at the Apple Store. We also sent five candidate manager positions to the Ritz-Carlton training program which is famous as a first-class hotel and learned the skill of concierge . Listening to the name "Genius", it seems that the support staff at the Apple Store is an incredibly intelligent technician, but the true role of Genius is to sell goods appealing to emotions That's what the Guardian writes. In order to make that role possible, there seems to be a manual entitled "Genius Training Student Workbook" for support staff at the Apple Store.

This manual aims to make prospective genius control emotional communication to control the customer's experience, to relieve the tension of the customers, to make them happy, to loosen the purse strings. Also, if a customer encounters a problem with the product, not only to apologize but to sympathize with the customer so that the image of Apple's product is not rubbed inside the customer Also recommended.

For example, one of the techniques teaching by "Genius Training Student Workbook" is three "F": Feel (feeling), Felt (felt), Found (noticed). If the customer says "This Mac is too expensive," Genius says, "You feel that (Feel), I felt this price a bit high (Felt), but It is written to answer "Found" (realized that the software and functions being done are of real value). Genius's working Apple Store reflects Mr. Jobs and Mr. Johnson's idea that he wanted to thoroughly control from the staircase to the color of the table and the toilet's mark. The intuitive layout that Apple understands intuitively enough to understand everything that two people sticking out has become so unique as to establish Apple's brand. The customer service performance by Genius is exercised in a situation which is thoroughly managed by Apple to the last.

Meanwhile, Apple overhauled the store design over the past two years and renamed the "Genius Bar" to "Genius Grove". Also, the Apple Store, which opened in Paris · Champs Elysées in November 2018, opened all the windows to disambiguate the boundary between the inside of the store and the outside of the store, and by placing a potted tree, the store is half public We offer it as space. Angela Ahrendts, former executive of fashion brands and Burberry , the retail division of the Apple Store, commented, "We call the Apple Store no longer a" store "but a" town square " We are announcing it for. "Ahrendts seems to envision the Apple Store to be one with the community, but what really hopes is actually the opposite and the community will sneak up in the store," The Guardian argues It was.