Even on Earth and Mars, rivers are built on 'mathematical laws' 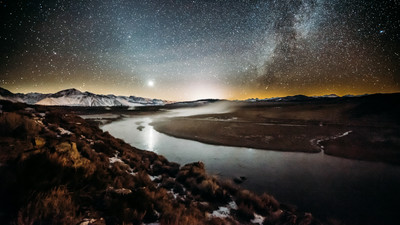 As is seen in the sunflower seeds and the helical structure of shellfish, the natural golden product that seemingly seemingly random appears to be built on mathematical laws, as the " golden ratio ", which is said to be the most beautiful aspect ratio of a rectangle, . Recently it has been known that the flow of rivers running through the ground while branching several times is also formed on mathematical laws.

A Universal Law for the 'Blood of the Earth' | Quanta Magazine
https://www.quantamagazine.org/a-universal-law-for-the-blood-of-the-earth-20181128/

The flow of river naturally carved seems to be intricately complex, but some scientists think that such a natural pattern may be explained by a mathematical model. Geomorphologists continue to statistically calculate the laws concerning network formation of rivers, for example, there is a rule of thumb of " Hack's law " that the flow of a meandering river is proportional to the 0.6th power of the catchment area I will.

Daniel Rothman, who is a geophysicist of the Massachusetts Institute of Technology, " Laplacian growth was thinking the rivers of the network by (Laplacian growth)" is formed.

French mathematician Pierre-Simon Laplace of the name of the 18th century supports the theory that "All events are determined by events preceding that event", and all the phenomena that will arise He was advocating that mathematical calculation is possible. Laplacian growth is a mathematical growth model of naturally occurring fractals such as the discharge tree pattern and the formation of snow crystals just as Laplace has claimed. Of course, the pattern of Laplacian growth varies depending on the detailed conditions, but the research team led by Rothman "branches as the river water gathers, the branches continue to grow further, depending on the area of ​​the water penetrating the soil ahead It is claimed that a river channel will be formed by the mechanism of branching. To illustrate this hypothesis, the research team investigated the Apalachicola River basin in northern Florida.

The research team first predicted the flow of water in Florida based on previous studies on groundwater erosion. And I verified by comparing this theoretical prediction with the actual appearance of Apalachicola River.

When the research team branches into a stream of one river, the angle formed between the two streams is predicted to be "approximately 72 degrees" from the balance with the penetration of water into the ground Did. As a result of actually investigating more than 4966 branches in the Appalachicola River, the average of the branching angle was 71.9 degrees, it turned out that it was about the same as expected. Hansjörg Seybold, one of the research teams and Swiss Federal Institute of Technology, commented, "It is close enough to believe that the theory is correct." However, only the Apalachicola river in Florida was the only thing that confirmed that the theory and the actual data were nearly identical. In order to investigate whether Mr. Rothman's theory applies to other rivers, the MIT research group accessed the database of the American Geological Survey Agency and verified it with the digital map data of the main river in the United States. Then, it turned out that the average of the branching angle of the river flowing in the wet soil containing plenty of groundwater was about 72 degrees like the Apalachicola river, and 45 degrees on average in the dry soil where the groundwater is small.

Until now, rivers were thought to be formed by rain precipitation rather than underground water. However, by a series of surveys, Mr. Rothman's theory that "the river network is greatly influenced by the groundwater contained in the soil and is formed based on mathematical law" has been proved. Christopher Paola, a geologist at the University of Minnesota commented that "72 degrees, which is exactly one-fifth of one lap (360 degrees), is not magical, mathematics is beautiful and elegant."

In addition, Mr. Seybold thought that Mr. Rothman's theory could be applied to Mars, analyzed the image sent from the Mars probe, and examined the traces of the river carved on the Martian Earth surface. It was known from traces engraved on the topography that Mars was once a liquid water was flowing, but astronomers and geologists discussed where the water came from. Analysis showed that the bifurcation angle of the river of Mars was very narrow as well as the dry area, Mr. Seybold said "The river that flowed through Mars did not originate from groundwater, most of the water circulation was on land It is presumed that it was done. "