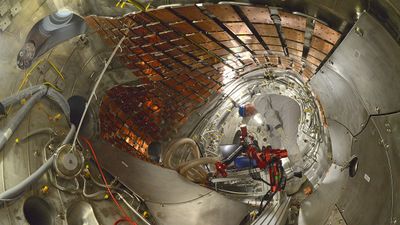 After that, the research team refined Wendelstein 7 - X and installed a new measuring device and heating system. In experiments again conducted from July to October 2018, it seems that we succeeded in sustaining the plasma for 100 seconds. In response to these very strong experimental results, the research team started further improvement of Wendelstein 7-X to achieve the goal of "sustaining the plasma for 30 minutes". In order to increase thermal energy without loading the wall of the equipment, we are replacing the diverter graphene tiles that make up the fusion reactor with water-cooled equipment made from reinforced carbon fiber over the next two years.