Experts responded to the question 'Smoothie is really good for you?' 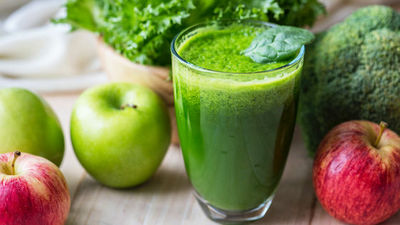 Smoothies made into drinks by mixing with fruits, vegetables, nuts, etc. together with milk and water are attracting popularity as they can easily take various vegetables and fruits. Many health-conscious restaurants and cafés prepare smoothies for menus and there are also places that offer smoothies after exercise at the fitness gym in the USA. The expert answers whether such smoothies are really good for the body.

Are Smoothies Healthy and Good for Weight Loss? | Time
http://time.com/5447846/are-smoothies-healthy/

Smoothies are sometimes sold at shops, but there are not many people who make themselves using mixers etc. When making a smoothie by yourself, you can put everything in the smoothie like water, milk, vegetables into vegetables, plant seeds and nuts, protein powder, powdered green tea powder, supplements such as toppings such as flakes, Lean Andrew, who is a controlled nutritionist in the United States who writes health lectures and writes, says.

So, Miranda Hammer of a managed dietitian and natural food chef who is based in New York stated that the balance of vegetables, fruits, protein, fat is important about what points to be aware of when creating a smoothie I will. Mr. Hammer says that smoothies are the basis for laying healthy eating habits as "Smoothies are a great choice for healthy food intake."

In order to incorporate protein and fat into smoothie, Mr. Hammer says seeds such as Chia seed · hemp seed (hemp fruit) · flux seed (flax seed) and milk, sugar-free yoghurt is recommended. Also, adding spices such as Acai and cacao powder and cinnamon to spicy nutmeg will also help to increase the smoothie's nutrition. Mr. Andrew recommends "try challenging mixing various ingredients" and encourage you to make the most of the benefits of Smoothie's ability to ingest a wide variety of diet at once. "Fruit smoothie" which mainly fruits having antioxidant effect and anti-inflammatory effect is also gaining popularity, but Andrieu warns that smoothing with smooth fruit using too much fruit will increase the intake of fructose too much I will. In order to balance nutrition, Mr. Andrew recommended adding dark green plants such as spinach and keel and adding ingredients containing protein to get satisfaction.

Also, Mr. Hammer says, "Please pay attention to the smoothies purchased at the store, you can not control the ingredients in the smoothie made at the shop." The smoothies sold at the store often add a lot of fruits and artificial sweeteners, milk containing abundant fat and sugar to improve the taste. Mr. Andrew says it is not a big problem if it drinks occasionally, but regularly purchasing and drinking smoothies at a kiosk may cause excessive sugar intake and indigestion.

Generally "green smoothies" are often healthy, Mr. Hammer adds leafy vegetables such as spinach and keel to smoothies, and adds nutrients such as dietary fiber, calcium vitamin A, vitamin C, vitamin K I make it my own rule to add it. Furthermore, leafy vegetables seems to be expected to reduce the risk of type 2 diabetes and age- related dementia. Although only 9% of Americans meet the vegetable intake required on the 1st day, it is possible to supplement vegetable intake by smoothie. Smoothie is often advertised as "releasing body poison" or "effective for dieting", but at least it is doubtful whether smoothie will play a major role in terms of "discharging body poison" Thing. Exhausting toxins from the human body is due to the workings of organs such as the liver and the kidneys, and smoothies do not have a chemical basis for promoting the release of toxins.

Regarding weight loss as well, it is not the idea that "If you drink smoothies in addition to daily meals, you lose weight," it seems that you should think about what part of the meal should be replaced with smoothie. Smoothie supplements nutritional balance, plus keep daily life rhythm regularly, sleeping time and exercise are done, then we get weight loss results, smoothies may play a part of diet, Mr. Andrew thinks that it is not all of a diet.

When drinking smoothies as a substitute for meals, it is necessary to incorporate the nutritional value obtained by meal in a balanced manner in the smoothie. "Mixing fruits is not enough," Andrew said, and it is necessary to mix ingredients such as nuts for seeds and yogurt for kefir and protein powder to vegetables, basically it is not different from cooking. Andrew 's recommended breakfast smoothie recipe is "1 frozen blueberry cup", "frozen banana half a cup", "1 cup of frozen cauliflower", "1 leaf of kale", "sugar - free vegetable Milk 1, 2 cups "" 1, 2 spoons of plant seeds "" protein powder with 1 spoonful of spoonfuls "and" appropriate amount of cereal ". 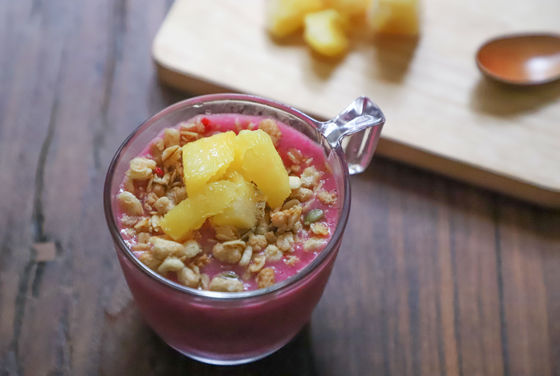 As a point to note when drinking smoothies, it is important not to forget the fact that "smoothie is a substitute for mixer to bite food on mouth and contains a lot of calories". If you drink gokogoku from the cup just because it is a drink, it can cause fat, as a result. So Mr. Andrew recommends smoothing "Smoothie with a spoon and drink like a soup".