Due to the influence of the solar flare, it was discovered from the confidential release material that the 'mine' installed during the Vietnam War era was erroneous 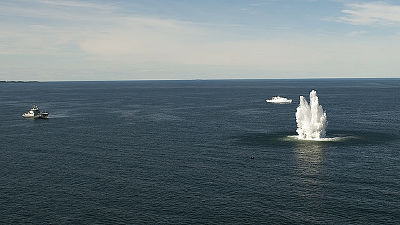 By Commander, US Naval Forces Europe-Africa / US 6th Fleet

A large explosion occurs on the surface of the sun and a large amount of energy is released to outer space It is known that " solar flare " can greatly destroy the electricity transmission network on the earth and greatly affect electronic devices such as computers It is done. The solar flare that occurred in 1972 was revealed from the confidentiality record that the detonation that the American military installed in the sea during the Vietnam War of the time affected the bomb " mine " and was detonated.

Solar flares occur frequently on the surface of the sun, while small ones occur three times in a day. However, occasionally large large solar flares emit extremely large energy, and even a part of them can reach the earth will cause great damage. The best example is the Solar Arashi in 1859 , also known as the "Carrington Event", where auroras, which should normally only be observed only in the Arctic Circle, were observed in Hawaii, etc. In addition, too much aurora It is also recorded that a coal mine working in the Rocky Mountains in the USA misunderstood for breakfast because it was bright.

In the immediate future, the magnetic storm that occurred in March 1989 is well known. At this time, the electricity transmission network was destroyed in Quebec, Canada, causing a large-scale failure, and the influence of the world was greatly influenced, such as communication stops in the American meteorological satellite. An example of solar flare observed by NASA looks like this. A ring of a large flame that is more than ten times the diameter of the earth occurs on the sun surface, causing explosive movement at a certain timing and releasing a lot of energy and substances to outer space.


And it was confirmed that a phenomenon rare in the solar flare that occurred in 1972 was confirmed. In solar flares, massive emissions with high energy usually reach the earth over several days and cause damage, but large solar flares occurred from August 2 to 4, the same year, only 14.6 Reach the earth in time. In that case, it seems that radio waves are obstructed on a global scale and high X-rays are continuously observed for 16 hours. It was also the first time that a satellite succeeded in detecting gamma rays for the first time in observation history. And, of course, a large aurora occurred on the global scale, and in that case it is said that it was bright enough to make shadows in the aurora.

What was revealed this time is "the explosion incident of a mysterious mine of mass mines" which occurred at the same timing as this solar flare. Mines that the US Navy set up in the sea of ​​North Vietnam in the late Vietnam War exploded in large quantities at the timing of just a few months after installation. The relevance of the mysterious explosion phenomenon which can not be considered commonly and the solar flare was pointed out, but this case is said that it was not clarified for a long time as confidential information on military. It is a case of a mine explosion caused by solar flare that occurred about 50 years ago, but this problem is strongly worried that it will become a further threat in modern times where everything and every device is electronically controlled. Compared to the 1970s, the world in the latter half of the 2010s depends on electronic devices that are not comparable with the past, just like the Carrington event, even if the grid is destroyed, the lives of contemporary people are destroyed It is clear that it will suffer serious damage. There is even a possibility even that the possibility that information sources such as PC, Internet, television and radio, etc. become completely unusable, including smartphones which are normally used now exists.

No matter how much technology develops, even a tiny "sneeze" that the sun produces is difficult for human beings to deal with adequately. With the development of space science, the space weather forecast that predicts the impact on the earth by detecting the occurrence of large scale solar flares is also developed. Nonetheless, as with disasters such as typhoons and earthquakes, preparations from the usual way such as preparing food and water at hand for the immediate future so as to minimize the influence of "solar flares" It seems to be necessary.