The New York subway / bus service is in a crisis situation, also pointed out that 'entered the' spiral of death ' 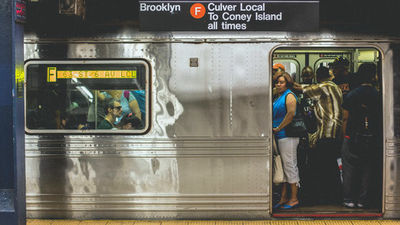 The New York State Urban Transportation Authority (MTA), an independent public utility company in the United States of America, operates subway and buses in New York, and the number of users on a day exceeds several million people, It is essential. Such MTA has become a problem that chronic deficit is a problem and it is pointed out that "MTA has entered the spiral of death".

In November 2018, the MTA warned that "a major service cut or a raise in fare is necessary" due to the financial crisis situation. Public transport service cuts and fare raise used by millions of New Yorkers per day have a negative impact on many people.

Andy Byford, who was welcomed to break the crisis situation of the MTA in January 2018, is faced with a serious problem of financial difficulty as soon as he took office. Mr. Byfold said at the board meeting, "It is never acceptable for the MTA to push forward to the worst situation as it is," he says he wants to surmount this situation by somehow raising freight rates and cutting service.

MTA has reduced fare revenue due to a decrease in the number of users, so there is no cease in deteriorating financial conditions. Benjamin Kabak, who runs a website on New York's subway " Second Avenue Sagas " said, "MTA has entered the" spiral of death ", and as people refrain from using MTA without refusing MTA's revenue declined and pointed out that the fare is being raised without sufficient service being offered. To overcome this situation, the MTA will raise the base fare from 2.75 dollars (about 310 yen) as of November 2018 to 3 dollars (about 340 yen) by March 2019, or the base fare will be We are considering reducing the bonus obtained when purchasing a commuter pass as it is. There is also discussion about reducing services equivalent to about 41 million dollars a year (about 4.6 billion yen), a proposal to lengthen the operation time from the start point to the end point in the subway and bus route and to delay the first operation time We are also looking into the view.

Even if these reforms are approved and implemented, the MTA is anticipating a large deficit and it is said that 2022 predicts that nearly 1 billion dollars (about 110 billion yen) of debts will accumulate. In order to resolve these deficiencies, the MTA says that it is necessary to eventually further cut the service and increase the fare by 15%.

In addition, Mr. Byfold said the ambition to improve the confused transportation system by reforming to replace the old traffic lights made before the Second World War with new models, in order to deal with the chronic delay in the subway in New York I'm waiting. This Byfold's plan is expected to cost around $ 40 billion (about 5.5 trillion yen), but this planning fee is not included in the deficit currently in the MTA. The problem that the New York subway is easy to delay is more serious than before, and the number of train delay in 2017 has tripled in 2012. There seems to be some improvement after the fall of 2018, but one third of the trains operated still are delayed, which makes the New Yorker about 300 million dollars a year (about 33 billion yen) It is presumed that we are wasting the working hours of the day.

Andrew Cuomo , governor of New York State, is seriously considering this problem and is considering introducing "congestion tax" for drivers entering central Manhattan. In addition, the MTA claims that passengers travel to the dispatch service due to overheating of dispatch services such as Uber and Lyft, and this has led to a decrease in the number of users of public transportation.

Mr. Byfold says "New Yorkers say" service of MTA is bad. "However, the cause is due to the shortage of funds, and further conditions will be worse unless price increase of fare is realized. There is no option other than doing. "