What is the trace of a gigantic meteorite that caused mass extinction of dinosaurs that remains on the earth? 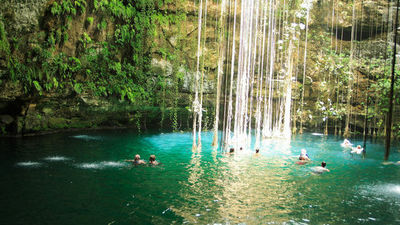 Many dinosaurs once lived on Earth, but mass extinction occurred about 65 million years ago and disappeared. Various theories have been proposed as causes of this mass extinction, also called the K - Pg boundary , but the mainstream among them is that "climate change occurred due to meteorite collision, massive organisms were extinct". Evidence supporting such a meteorite collision theory seems to remain on the Yucatan peninsula in Mexico.

BBC - Travel - The buried secrets of the deadliest location on Earth
http://www.bbc.com/travel/story/20181111-the-buried-secrets-of-the-deadliest-location-on-earth

In the limestone zone of the Yucatan Peninsula, there is a natural fountain with groundwater in the sink hole called Cenote . The water of Cenote seems to be glowing blue and it is a popular tourist spot which is also listed in the sightseeing brochure of Yucatan Peninsula. For Maya civilization water accumulated in Cenote is a valuable source of water, archaeologists seem to have been paying attention to deepen understanding of the Mayan civilization through Cenote for a long time. The spot where such Cenote is dotted seems to be random at first glance, but archaeologists seem to draw a circle in which half of the circle protrudes into the sea on the Yucatan Peninsula, which is in the vicinity of cities such as Merida , Cisar , Progreso I found out that it was a pattern. Archaeologists were at a loss what was meaningful in finding this mysterious pattern, but in the academic conference held in Acapulco in 1988, researchers in geography such as satellite photographs He said he reported this finding.

That announcement happened to be heard by Mr. Adriana Ocampo who was a young planetary geologist at Nasa. When he heard the semicircular pattern remaining on this Yucatan peninsula, an idea appeared in my mind. "When I saw that slide, I thought" This is a wonderful discovery, "Mr. Okampo thought that further evidence was needed at the time though it was in an excited state, and the surface was cool It seems that he had been touched down.

Mr. Okampo approached the archaeologist who announced and asked, "Have you thought about the possibility that this discovery was due to a collision of asteroids occurred 65 million years ago?" However, the archaeologist was confused and did not understand Mr. Okampo 's meaning. Mr. Okampo's speculation that the discovery of archaeologists is a trace of a meteorite collision has led many researchers to focus on the traces that remain on the Yucatan peninsula and an international research team began to investigate from the beginning of the 1990s Did. It is now clear that a meteorite of 12 km in diameter collides near the Yucatan Peninsula, and the edge of the crater made by it collides with the spot where Cenote is scattered.

I made a crater of 30 km in depth with a shock impacted by a meteorite, and a large amount of ash covered the earth and shielded the sunlight for more than a year. Researchers think that the temperature has fallen to below freezing, and 75% of the living things at the time on the earth died out. At the point where the meteorite collided, there was a small town called Tikshrub / Puerto , so the colliding meteorite is known as the Tixush Lube collision body and the crater is known as the Tikushrub crater .

Tixush Lube · Puerto is a small town with thousands of people and is a place of taste like a village near many harbors on Yucatan Peninsula. Little is known about the fact that the collision point of the meteorite that caused dinosaur extinction is Tikshurou Puerto, sometimes a few dinosaur enthusiasts who are about to visit Tikszrub / Puerto also mistakenly left an automobile for about an hour He said that he might go to the town called Tixush Lube Pueblo .

Even if I arrive at the correct Tikshrub / Puerto, there are dinosaur paintings drawn by local children in the main plaza, playthings imitating dinosaurs, and there is a small monument in front of the church. In September 2018, " Chikushurobukurator science museum " was opened in Merida, and the museum instantly informed the event that triggered mass extinction which occurred locally, improving people's understanding I want to make it. Currently local residents are not aware of the major incidents that occurred in the land nearly 65 million years ago and many of the tourists who come to swim to Cenote also said that "a crowded hole in the limestone zone has accumulated water" People who understand mostly. Mr. Okampo states that "This area is a very special place and deserves to be registered as a World Heritage Site," I believe that education for the surrounding residents is necessary in the future.