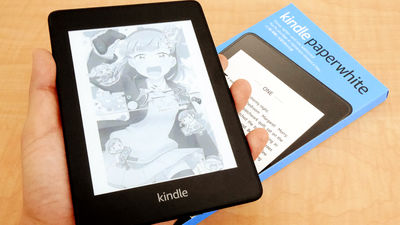 A new model of Amazon's e-book dedicated terminal " Kindle Paperwhite " appeared on November 7, 2018. It evolved from the front model released in 2015, such as a brighter screen and IPX equivalent waterproof function, and it is said that it is the lightest model of the Kindle series. As I got the real thing, I immediately tried touching it compared with the 2015 model.

The package of Kindle Paperwhite looks something like this. The contents are Kindle Paperwhite's main body, instructions, paper on which charging method is described, charging cable for MicroUSB terminal. 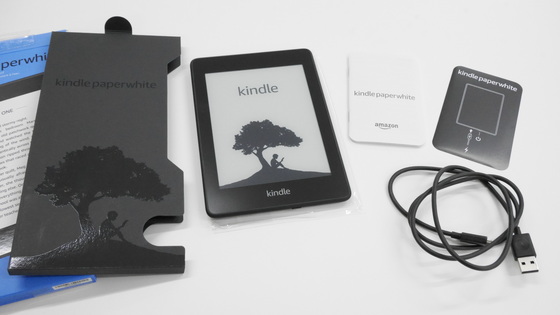 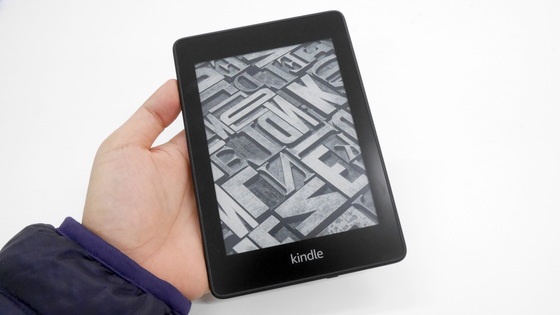 The biggest change was around the display. Because the new model has waterproof performance of IPX 8 grade, the difference made in the display and the bezel part that was in 2015 model is gone. The surface of the display is a mat processing that suppresses reflections, it is a touch which has not been changed from the previous model and is slightly smelly. When manga is displayed sideways it is like this. 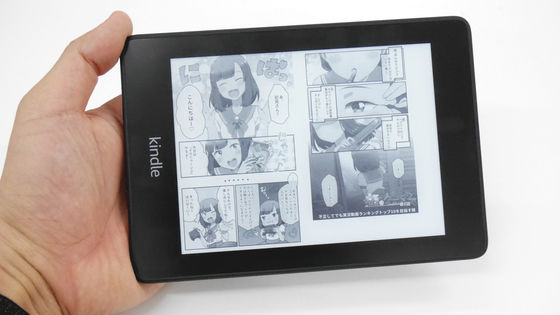 The Amazon logo engraved on the back is a little smaller, and at the bottom there is printed a thin technical mark that was not found in the 2015 model. 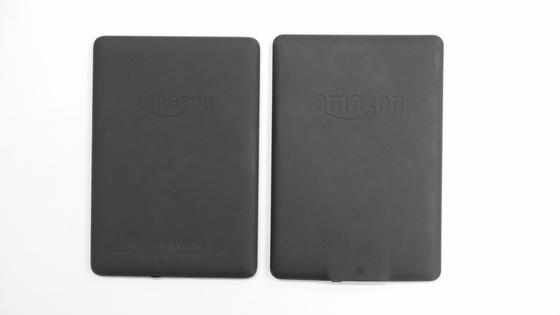 It is a result of overlapping the new model (top) and the 2015 model (bottom). The charging port on the bottom of the main unit has a change in the surrounding shape, but the point that it is MicroUSB connection has not changed. The shape of the central LED lamp and power switch has changed from the 2015 model. A battery with several weeks has almost the same performance as the 2015 model, and charging time takes about 3 to 4 hours.

You can see the actual turning of the page in the following movie. On the left is the new model, on the right is the 2015 model. The response to the touch panel and the reading speed of the next page are the same, and have not changed from the 2015 model.


The new model is the first waterproof type as Kindle Paperwhite. The waterproof performance is "IPX 8 grade" that it will not flood into the inside even if it continues to submerge, and if it is up to 2 m in depth, there is no problem even if it sinks for 60 minutes. I tried to shower the shower like a movie below or immerse it in a bathtub filled with water like what the waterproof performance actually is like.

I tried the waterproof performance of Amazon Kindle Paperwhite - YouTube


Since the MicroUSB terminal part at the bottom of the main unit was still bare, it was uneasy whether it would not be broken, but even if you apply strong water current or submerge it, the screen will disappear or the power will go down There was not, there was no problem. However, it is necessary to remove moisture by wiping firmly with a towel or tissue firmly, if you leave wet as it will cause a malfunction, do not overstrain the waterproof performance when it gets wet. 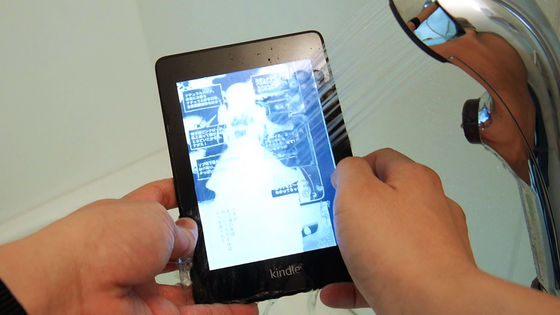 Also, if the screen is full of water, the reaction will inevitably get worse. When putting on a shower or submerged underwater, it is almost inoperable. Kindle Oasis also boasts high waterproof performance as well, because physical buttons are attached to the model, Kendle Paperwhite can not feed pages without problems even if the touch accuracy drops, but the page turning button is not installed in Kindle Paperwhite Therefore, when it is wet, operability drops dramatically. Still, when stopping the shower and the water runs out, it was able to operate normally, so it can be said that there is no problem for careful use in the kitchen, bath and pool side. 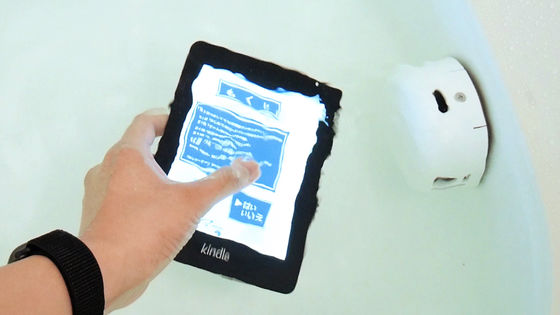