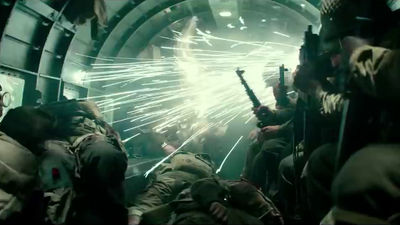 As a special image of a horror movie " Overlord " who knows the existence of biological experiments that Nazis · German birthday crew had lost to enemy land in Europe in the night before the Normandy landing plan , he cut out only the place where the hero was carried by the transport machine Special video has been released. Taking out only here, it seems like a sky version at the beginning of " Private Ryan ".


The hero / voice that leaves himself to shake in the transport plane. Sometimes there are big tremors, and the surrounding soldiers are squatting.

He is saying "I will go smoothly" to the next soldier who cries for anxiety, but he will not stop saying "I know what the Nazis did for Rosenfield."

In addition, the superior officer said "Please sit down and keep silent" to get soldiers who are terribly fluctuating and dangerous.

Although "superior, young lady?" Is a superstate who crowns, the transport machine progresses to the violent airspace of the anti-aircraft gun rapidly, and the fireball is visible beyond the cockpit.

Furthermore, the following transport aircraft will be shot down.

Finally, the aircraft carrying the voice was caught by the anti-aircraft gun, soldiers who injured in succession. A soldier who stood up as "Sergeant Hall!" Also shot and crumbled as it was.

Hygiene troops desperately deal with it, but during that time the engine has been killed ... ...

There is no momentary delay.

As the surroundings are enveloped in flames, the descent strategy starts at last.

Meanwhile the damage of the aircraft overlapped ... ...

Voice screams and it is thrown into the sky.

It is a voice that descends somehow, but waiting for him in the future is a more harsh fate ....

The movie "Overlord" is planned to be released to the US on November 9, 2018, and a preliminary reservation of Blu-ray on the PlayStation Store began on the same day. The schedule for publishing in Japan is undecided.