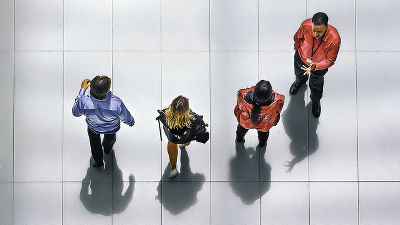 According to a survey of 76 countries and 80,000 people, one of the indicators that prosperity in the country prosperity "GDP" is high, and the country where the idea of ​​gender equality is widespread exists between men and women Research results have been announced that the difference in thinking becomes bigger. Although it is a stage where more detailed investigation is needed in the future, it is gaining attention as a result indicating that each degree of freedom will make it possible for men and women to act with their own way of thinking.

This research was conducted by Professor Armin Fork Economics at Bonn University and a research team by Johannes Hellmell Economics Ph.D. at the University of California, Berkeley. They investigated how the wealth of the state and gender equality affect "choices" on social factors.

In the survey, 76 countries are divided into 4 groups by "GDP" and "gender equality" indices, mapped in relation to the differences of mentality among men and women in each country, and the distribution is observed . At this time, "There is no difference in thinking among men and women" means that "men and women have come to have a similar way of thinking", " Especially women are obliged to adapt their minds to male society " That means that.

In the graph below, we will explain the relationship between "to take risk" (pink), "negative response to others" (orange), "altruism" (yellow green), "trust" (green) The magnitude of the difference between men and women in the six elements of "correspondence" (blue), "patience strength" (purple) is indicated by the height of the graph. The graph on the left shows the difference in mindset between men and women (vertical axis) and the scale of GDP (horizontal axis), and the graph on the right shows the case where the horizontal axis is replaced by gender equality. In both cases, it has been shown that the differences between men and women are stronger, as the overall trend is to improve GDP and increase gender equality and make it easier to live. 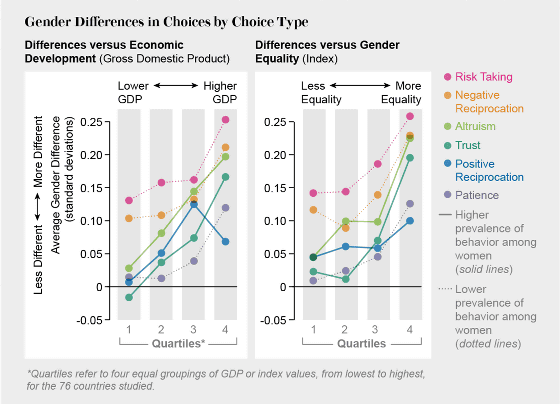 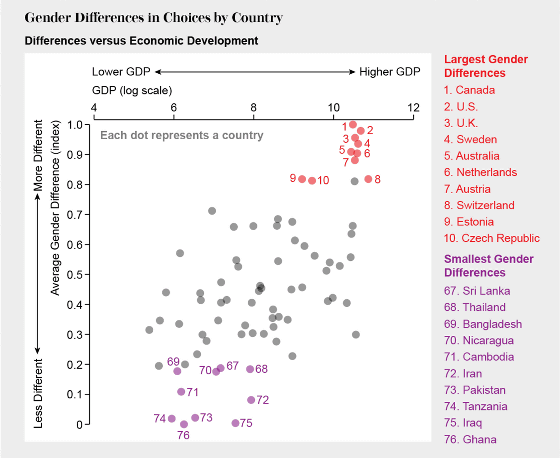 This trend can be taken in the same way in the graph where the horizontal axis is replaced with gender equality. 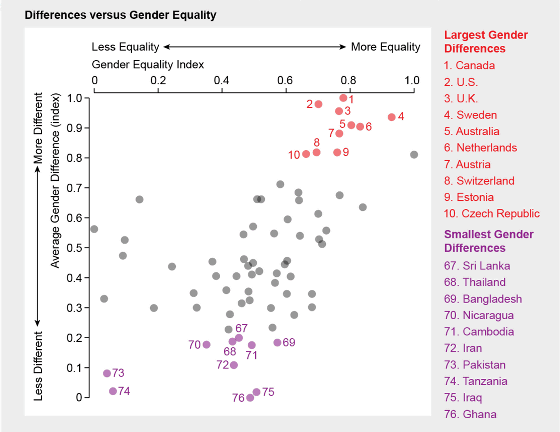 From this result, it seems that it seems to suggest that an environment where freedom of choice is established by exercising "richness" as each country gets better living. However, as Alessandra Fogli, who is not involved in research at the Federal Reserve Bank of Minneapolis, pointed out, it is also important to consider the bias of data taken in each country more accurately. In particular, it is pointed out that the generation participating in the survey has fallen apart from adolescent young people to elderly people in their 90s, and the differences found among the generations are not accurately reflected in this study I will.

According to Mr. Hermel, the point revealed in this study is that "there is a certain pattern in the relationship between men and women and GDP and equality" and that further research is required in the future. In addition, Mr. Helmer emphasizes that this result does not support "evolutionary and biological explanation for social factors" by this result. "The biggest misunderstanding is that this result is to think that" social or gender roles are not involved in the formation of differences that exist between men and women, "said a more detailed It states that continuing research is important.