Misrepresentations from Twitter are pushed through continuously Users are panicked, bugs fixed 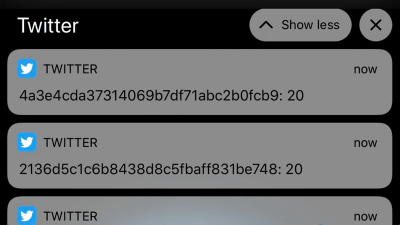 SNS and messaging applications that you use everyday are those that you can predict that "this is not enough if you are not watching smartphone." If a large number of notifications contrary to that expectation are displayed, it is worrisome "What happened?!", But only a list of alphabets and numbers are displayed among some Twitter users A bug reporting that more than one mystery notification is being sent has been reported.

Everyone is freaking out over this weird Twitter notification
https://mashable.com/article/twitter-push-notification-spam/

On October 16 (Tue) 12:30 local time, many Twitter users received strange notices on smartphones. According to the report, it seems that a considerable number of users have received multiple notifications consecutively, and the notice says that a combination of numbers and alphabets and one or more colons are combined. Many Twitter users tweet screenshots as Twitter sent a lot of mysterious notifications without any explanation.

"Twitter has become unknown to Wake after the latest update. Does anyone know about this problem?"


Looks like @ Twitter is having a freak out moment after the last update. Anyone else having this problem? Pic.twitter.com / 3 nUU 2 t Gq 2 g


"Is there someone else receiving strange notifications from Twitter?"


Anyone else get a weird Twitter notification just now? Pic.twitter.com/WQZAt 3 r 9 Ua


Anyone know what these these random Twitter notifications are ?? pic.twitter.com/DnS0O1Kyys


Some did not receive a notice and some people tweet that "I am the only person not receiving numbers notification from Twitter."

Twitter's Jack Dorsey said tweets from his Twitter account, "We are already working on this issue." As Dosse CEO's notification screen shows notifications by alphabet and numeric strings in multiple ways, it seems to be a victim of misrepresentation notice being displayed like many users.


After that, Dorsey reported that the problem was fixed.


Should be fixed now. Working to understand why it happened


The why, from team: "We send an invisible background notification to the app with badge counts (mainly unread notifications, DMs, etc.). The issue caused these notifications to be visible for a short period of time. exactly why, but quickly reverted. "