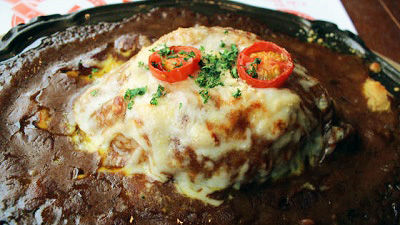 The curry made from the beer only without using water was tasty. Indian curry and Japanese curry are totally different dishes. Curry born in India has achieved its own evolution in Japan. By baking this Japanese curry another dish called " baked curry " was born. It was a dish that understood the attention to Japanese hot food.

Hello, this is Takuya Sudo @ Charriderman who toured the world by bicycle . Although it was Fukuoka citizen all the time, Kitakyushu specialty did not come with a pin even if it is said "baked curry". However, recently it seems to be getting popular as a B grade gourmet. Only information that intensifies appetite when examined. So, when I visited Kitakyushu the other day, I ate it.

What is baked curry Mori who flourished as an international trade port from the Meiji era to the beginning of the Showa era was lined with many Western food stores. It is said that a high-color menu called "baked curry" was born because of such an international city. Although it may have been a classic in Kitakyushu, I feel that it has not been said that the name recognition was high from a long time ago. The author of Fukuoka citizen did not know either. The B class gourmet boom in the latter half of the 2000 would boost the nationwide popularity of baked curry. In 2007, a trade association based on Yaki curry offering at Mojiko Port was founded, and in the same year an event called Moji Harboraki Curry Fair is being held.

Baked curry is cooked in the oven with curry sauce and cheese on top of the rice. The difference from curry doria is not to use butter rice or white sauce. It is a similar dish, but the one near curry is baked curry and the one near Doria is called curry drier.

Moji Port Brewery Studio It is a moji port that always passed through, but when it stops it is an attractive place as a sightseeing spot mainly in the retro district where Taisho era building remains. There was also local gourmet called grilled curry. INFO SHOP When I asked the owner of the port city of Mojiko Port, I asked the shop called "moji port beer studio".

The place is here On that day I was doing the event "The 75th Mojibata Minato Festival". People, people, people filling up Disney 's Mickey coming to the parade. I was worried that a queue could be established at Moji Port Beer Studio, but I could go to the store as soon as I got past the opening at 11 o'clock. It will be shown to the restaurant on the third floor.

Mojiko Port This is another retro concrete building in a retro district, which will be a Mojipato beer studio. Although I was alone, I let you through the window seat. The meal while watching the Kanmon Kaikyo is also exceptional. The inside of the shop was bright thanks to the large windows, the atmosphere calm was created by the floor and the table feeling the warmth of the tree. 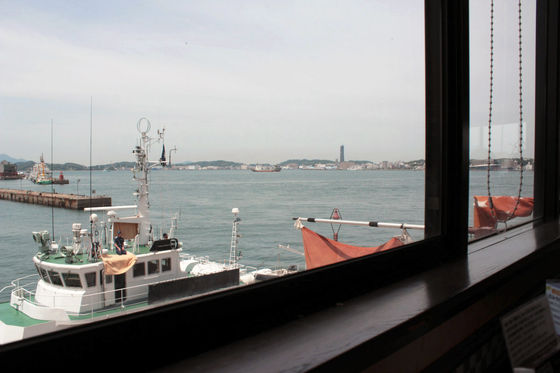 Dishes and silver placed at the window. There was pasta and pizza in the menu, but here is a choice of grilled curry. We ordered baked curry (double cheese) using the recommended local beer.

In the menu, "Without using any water, the original beer curry of prosperity using only the local beer (Weitzen), a beer with a fruity aroma and a rich flavor gave deep taste to curry, Introduction that it is healthy also because it contains abundant brewer's yeast which is said to be good for intestinal action.It introduces alcohol degree 0% (inspected by detector), anyone can order. An island of rice floating in the sea of ​​curry sauce. It looks omelette. But it is not egg but cheese that covers rice. The name of double cheese is not alright. We ordered "Moji port station (beer)" in glass. It is a lager beer with a bitter taste, reproducing the beer that had been drunk at the moji port early in the Showa era. At that time, four types of beer were listed on the menu: "Weitzen", "Pale Yale", "Pilsner", "Moji Port Opu Beer". When putting a spoon in the mountain of rice which plenty cheese took, the yolk of the egg which it was drawn from inside is melted out. Spitting thoroughly. 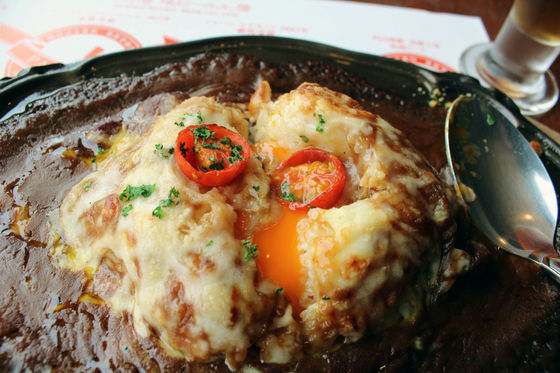 If you put it in your mouth, the impact like a beat will run through the brain. Trout cheese and egg koku intertwined with the umami of Rou which was drawn rather than ordinary curry overnight, creating a deep taste. Such taste spreads gently in the mouth. A blissful moment when the head fades. Its iteration.

As you go forward with eating, the spoon scooping hands become heavier with a slightly stronger taste. Let's eat tomatoes at such times. Juicy tomatoes were accented to refresh your mouth. Perhaps it was this kind of intention that there was a salad in garnishing a menu. Anyway, it was a curry filled with umami. Umami curry different from indian spice curry. 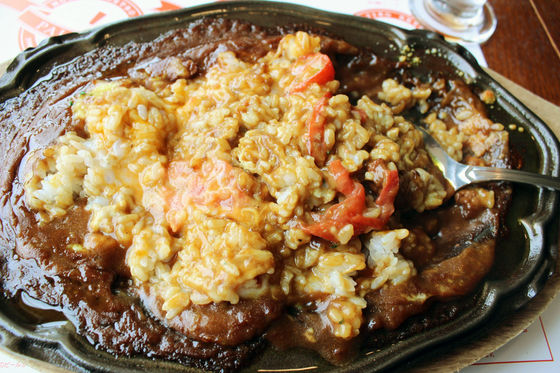 As I was working as a factory worker and eating a charrider, I was eating it on the ground, so when I saw the iron plate for the first time I was worried about the amount as "a little bit", but did the taste and cheese stick together in the stomach I was full with my dish. I feel a little tipsy with the glass of the local beer also open. Sleeping came and it was a little crowd after we finished checking out. While idly wrapped in happiness, I was idly walking in the retro district of Moji Harbor where sea breeze blows.

Moji curry at Moji Port Beer Studio was the best.