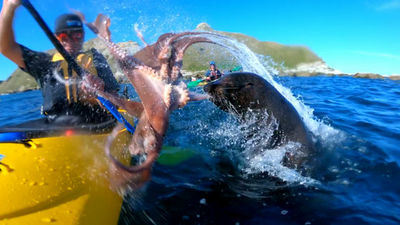 A man who enjoyed nature while wearing a kayak in the ocean has suddenly appeared in a tattoo "octopus" in a face-to-face hitting that happens to be hit by a happening incident on the GoPro of action cameras.

Kayaker blessed by a seal, slapped in the face with an octopus - The Verge
https://www.theverge.com/2018/9/26/17906542/kayaker-slapped-seal-octopus-new-zealand

A port town called Kaikoura in New Zealand, there are many ecotourisms that can interact with nature, such as whale watching and tours swimming with dolphins throughout the year. Kyle Millinder, who was talking with his acquaintance while enjoying a kayak on the coast of Kaikoura, was suddenly beaten her face in an octopus that appeared suddenly.

Mr. Millinder who was hit by an unexpected happening was the official creator of GoPro, and the members who were on the surrounding kayak were also GoPro 's team. As a result, even while riding a kayak, the members who were on the nearby kayaks are turning the latest model " GoPro HERO 7 Black " just released in late September, and Millindar is beaten by the furious A scene was filmed. You can see a movie containing a shocking scene with the following link.

Meanwhile in New Zealand ... Caption this for the opportunity to earn a # GoProHERO 7 Black.


A member wearing GoPro says "In the water?" And points the camera to the sea surface just beside the kayak. Apparently, it seems that it was talked about "There is a fur sear! 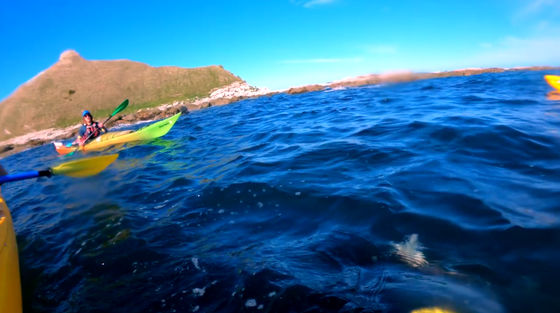 "Yes" and Mr. Mirinda's voice seems to be answered, a fur seals appears from under the sea. You can see that octopus is gently held on the mouth of the fur seals. With the momentum that jumped out of the sea, the fur seals twisted their body ...... I thrust the octopus in my mouth to the face of Mr. Millder. Mr. Millinder seems to be stiffening to the unexpected action of the fur seals. Otosei moves octopus from its mouth and continues to dive into the sea as it is. You can see that one octopus is hooking your legs in front of the kayak. Members who were turning GoPro raised the excitement that "Wow!" ... ... Mirinda who finally understood what he was beaten to something finally raised a scream like "groan!" Mr. Millerder said that the movement of the fur seals when they were beaten up was so fast that they asked the members, "What happened now?" After being beaten. The latest type GoPro is suddenly surprised by the members who are shooting, even though the camera shakes as the kayak shook and leaves a beautiful picture.

New Zealand fur seals who like octopuses do not get shy in public, they often swirl octopuses caught in the ocean and decompose them to eatable sizes. For this reason, this fur seals also did not specially attack Mirinda, but when they swayed at sea to disassemble octopus, it seems that octopus hit Mirindar's face accidentally at sea. The octopus stuck to the kayak was able to escape from the furry luckily, but then it hangs on Mr. Millerder's kayak. "With the help of the instructor I finally managed to peel off from the kayak," Mr. Millder said.