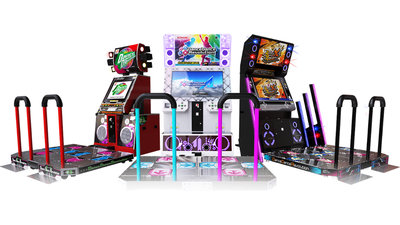 Konami's arcade music game " DanceDanceRevolution " celebrated its 20th anniversary from the operation in September 1998. In commemoration of this, the category "DDR SELECTION" appeared in the game, it became possible to play the representative song of the series title divided into the age, an event such as addition of songs that color 20th anniversary Deployment is done.

Prior to the whole world "Japan Blade Runner Black 2022" released in Japan, directed by Shinichiro Watanabe of "Cowboy Bebop" - GIGAZINE

Is "intelligence" inherent in it? It turns out that people stop growing by becoming confidently excess - GIGAZINE

A different color road race that collaborated with "Theatrical version Wimpy pedal" was held, so I got into the venue and caught sight of the situation - GIGAZINE


Though I was asleep, it smelled of rice and it got up and I got up too sleepy and my eyes do not open pic.twitter.com/fRyGmHbX70


I often open my piercing in my mouth

"Is there water from there?" www pew www? www "

It is so much to be fueled

I will show you the art of permanent preservation version of legend that hydrogen peroxide water will do it only once in a few years from now pic.twitter.com/mwcQUTilb2


Daikichi sleeping in my bed when I came home. Do not sleep with my own pic.twitter.com/WN8o5J9EHM

Impressions: What is this ... (Don der ) pic.twitter.com/7ss4gM1ADS


Four police officers went to a neighboring Italian gelato shop. I was just picking gelato seriously if I thought it was a crime. pic.twitter.com/ Re 6 dV 2 j 8 SW


【2018/9 / 26-10: 30 TBC weather storm】 "Announcement at 9 am on 26th" Typhoon 26, a large and very strong typhoon, crosses the Japanese archipelago from the 30th (Sunday) until October 1st (Monday) There was a fear. Even in Miyagi prefecture, rain and wind may intensify one day (Monday), so please be careful about future information. pic.twitter.com/vv4r42VvMH


Please be careful about the trend of large and very strong Typhoon No. 24 Charmy. The path of Charmy is very frightening. Forecast circle is applied to West to North Japan from 30th of the weekend to October 1st of the week. Please check the latest typhoon information. pic.twitter.com/OpiwNw8aBy

Information from HEPCO and a request.
Today (25th), an employee of a group company entrusted by the company got on the car vandalism in Otaru City, and it turned out that the work clothes were lost. Please be aware that if you are strangled by customers, please be careful about fraud etc. pretending to employees of our company or our group companies. pic.twitter.com/3rcW2hl7Wv

The city planned to utilize the closed "Children's Castle" complex type public facilities | NHK News
Even before GIGAZINE it has been posted as "GIGAZINE I tried staying at the" Children's Castle Hotel "in Aoyama, Tokyo .

In addition to cleaning brushes cleanly, you can dry from ordinary brushes to eye shadow tips, sponges and puffs. It is compact and it does not take width as well It is 100 yen with this! It is immediate purchase ... pic.twitter.com/EWNUYo7xcW


I encountered a reverse car for the first time.
I thought that I would die seriously ,,,

It was avoided by the reaction of the high side sliding rear by full breaking, but it was absolutely dead when I did the reverse

Please return your license from a pet . Pic.twitter.com/04u57UueGr

In light of the causes of human beings who bully, in the case of chickens I guess that it is largely attributable to the instinctive part.

In the case of a human being can also be preached by logic, chickens give another interest and suppress bullying by using physical strength. pic.twitter.com/4 BqHmSk 9 Gs


A surprising fact I knew by cooking the pumpkin named "Lolong". https://t.co/y860ZYD2HW


I was sent to the department that was said to be falling down, I made a presentation on V-shaped recovery method pic.twitter.com/VlTLsUOrpA


It is a thing list (complete version) that girls' staying and traveling are apt to forget.
Please use it for confirmation.
Thank you very much for your followers pic.twitter.com/MwaRWHARqq

iPhone's portrait photograph and depth (3D) information of the photo are saved, so you can do something strange like "Add light source after shooting" with other applications so much pic.twitter.com/vh1hqrO3Kf


Announcing Microsoft's ability to participate in the latest Excel "People squatting in the ability to enter data when taking pictures of paper data" Is there a gap in printing ...? - Togetter

Why is it persistent? I tried to ask the store "thumb shift" | Bunshun online

The difference between Japan and the United States seen in "ECG (electrocardiogram)" of Apple Watch: Health: Nikkei Digital Health


TV anime "Young girl warfare" We decided to rebroadcast at TOKYO MX, MBS, BS11 every week from October!
The first broadcasting is from October 9 (Tue) 24: 30 ~!

Do not miss the activity of Tanya Degreachef, a cotton covered with a young girl's skin!
#youjosenki https://t.co/1Biq0M3aWE


In addition, the latest 10 volumes of the comicized version "Young girl warfare" are also on sale today!

The 23rd Flight Air Magic Battalion attacks the submarine belonging to the Union Kingdom in secret behavior.
If we can hold down that submarine here, this time it is a safe backward elite course!
Tanya is breathtaking, but .... #youjosenki https://t.co/e4gyrWg2rM pic.twitter.com/rUFz7cZdyf


If you figured out, there are no girls pic.twitter.com/PahJ7gGCZK


Mr. Haichu said, "Because there are many choices," People do not have to go to university "without meaning" You do not have to go to college ", but you said that Shinkichi Fukumoto Unveils the Perfect Answer I return it. There is a difference between middle school and university, I think that if you are an ordinary man you should go to school. pic.twitter.com/Sg9I8sqfxe


If you remove the mask, there is a beautiful girl ...! !
I piggybacked on Princess Kuppa. # Hey Ho princess pic.twitter.com/EtCvqXYVPb


Monster who dies with farts I saw it for the first time ... pic.twitter.com/DEC8TrqGVK


That is what it is. pic.twitter.com/jrGR3jb7lQ


There are a lot of things when you keep a cat pic.twitter.com/ek8WTODuFA


Floral Yumi-chan! It was a fun story at the end of the last! With girls' anime animation! It was awesome thank you for making a theme song like an animation for a girl who is a certain girl Ella if I meet! ! It was awesome for all the staffs and cute scenes such as Fairy's appearance! ! pic.twitter.com/UMKXc5a6ik


【First batch date and time are banned! 】
TV anime "Karakuri Circus"
From October 11th at TOKYO MX every Thursday 22: 30 ~
BS 11 will be broadcast every Thursday from 24 o'clock.

At Amazon Prime Video
Episode 1: In Japan, scheduled to be delivered earlier than around 24:00 on October 10 (Wednesday). # Karakuri Circus #Karakuri_anime Pic.Twitter.Com/NMCPcAqzHn


If I say it in a personal hobby I also like the princess but I want to see the reverse ... Prince-like ... pic.twitter.com/TTKrz8rDCe

A dramatic transfiguration that can not be imagined from the real face ...
Fear of not losing the main part

It was hard for me to keep still for 8 hours,
It was pleasant to gradually make it into a venom alone with paint! pic.twitter.com/6qqSBuiFXg

I kept still for 8 hours and I could not move too much, so I used only straws or only small things like Mac potatoes

In the early stages I do not have smartphones face authentication! pic.twitter.com/RiNWlvmT2a


Fighting strength "When I got fired, in the presence of all the directors, your son got sumo wrestling, so it was silent till now, being told not to say things that would be detrimental to the church."

Bartender "There is a difference in this bottle from the usual one"
We were grown-ups we "What? Where ... ... Ah! Or !!"
We are the otaku rookie "Kingsman! It's a Kingsman! King's Man!"
Bartender "I got a reaction, it's my first time since stocking" pic.twitter.com/VnxKcPLTIE


Things to think whenever live-action is announced. pic.twitter.com/Xfc9po01Gj


Seibu Matsui retiring from active season only for this season, to a nearby team announcement: Nanjei stadium @ N J summary

Lotte Okada, the reason for retirement "I could not keep up with the ball I used to catch up": Summary Lotte!