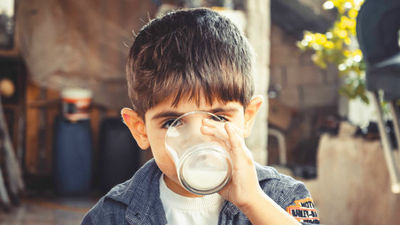 Some people who eat Western - style breakfast such as bread and cereal should surely drink milk with breakfast. A good news for such a person has been reported that the blood sugar level decreases not only after breakfast but after breakfast when drinking milk for breakfast.

A research team of Professor Douglas Gof who is conducting a study on meals at the University of Guelph in Canada studied the effect of drinking milk on breakfast in collaboration with the University of Toronto . The research team said that the experiment was conducted on 32 subjects whose average age is 23 years and whose BMI, which is an index representing body weight and physique, has an almost ideal physique of 22.2.

First of all, subjects who had fasted before the experiment gave oatmeal soaked in 250 ml of liquid as breakfast. Subjects were divided into three groups: "high protein (content 9.3%) milk" "normal level protein (3.1% content) milk" "water-based liquid" for liquids soaked with oatmeal It was. After that, the research team had three groups of subjects eat pizza as lunch.

In this experiment, subjects examined the blood glucose level by taking blood before and after breakfast, before and after breakfast, and said they also investigated appetite. As a result, it became clear that the two groups who ate oatmeal with milk had lower blood glucose levels after eating than the group that ate oatmeal with water based liquids. This is not a story after breakfast, the group who drank milk for breakfast seems to have been lowered to the blood sugar level after lunch. Also, for the group drunk with high protein milk, the appetite after eating was also reduced compared to the group drunk with milk containing normal levels of protein. This phenomenon seems to be the influence of protein such as whey protein and casein protein contained in milk. Both proteins act to release hormones that delay digestion from the stomach, especially whey protein promotes the rapid secretion of hormones, casein protein has the utility to last the effect of hormones.

Through the function of these proteins, when drinking milk for breakfast, feeling of satiety lasts, suppresses appetite, delaying the digestion of carbohydrates will reduce the blood glucose increase effect. It was also revealed that higher protein milk is more effective than milk containing normal levels of protein.

Professor Goff said about the results of this study: "The number of patients with metabolic syndrome and diabetes is increasing worldwide, and people need to review their diet in order to manage their risks. It is to encourage drinking milk to improve health and make risk management possible. "