Analyzing the heart rate data equivalent to 150 billion hours, what is the relation with health you found? 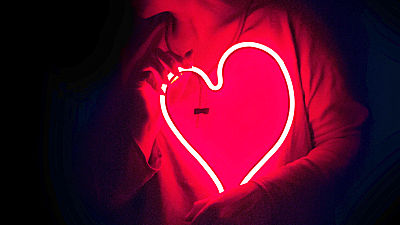 Health management device " Fitbit " used around the world has collected heartbeat data equivalent to 150 billion hours from tens of millions, and analyzes the data as age, sex, nationality, weight, exercise level etc. By doing so, researchers at Fitbit are trying to clarify how heartbeats are related to health. A writer and columnist, David Pogue , has spoken about the relationship between heartbeat and health, found from the huge amount of data collected so far.

This from the conducted scientific research to date, resting heart rate (RHR) is, is that a clue to predict the death of the early has been shown . People with RHR of 80 doubles the probability of heart disease compared with those with RHR of 50 or less. Also, when the RHR becomes 90 or more, the probability will be tripled. The relationship with diabetes has also been confirmed, and in China's research it has been shown that the risk of developing diabetes later increases by 23% each time the heart rate increases by 10 beats per minute.

RHR is said to be "lower the better" and is generally about 60 to 100 beats per minute, but it can be reduced by exercise. However, besides exercise, you will be affected by age, gender, emotional state, stress, diet, moisture level etc.

So, first of all, I will illustrate the relationship between RHR and age by gender. The vertical axis shows BPM (number of pulses per minute) and the horizontal axis shows age, which shows basically that female BPM is higher than men. 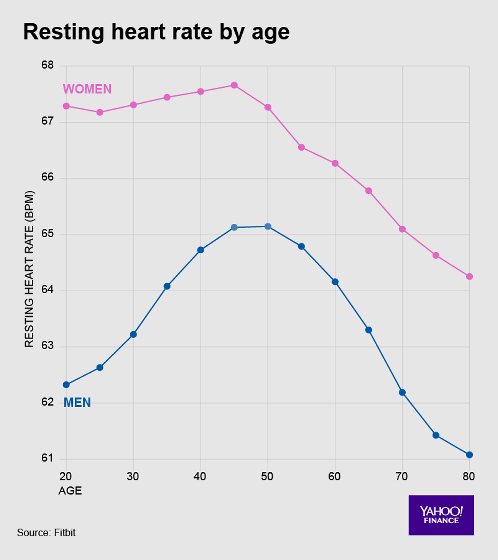 Both men and women tend to rise in RHR as they approach the middle age and thereafter tend to go down, but this tendency has not been observed until Fitbit investigated. Although the reason for the above is not clear, it is thought that it is one reason that it is busy during the child rearing period and becoming a lifestyle that you can not eat junk food or exercise. Of course, as the middle age, nature and metabolism decline, as the muscle weakens, the blood entering the heart decreases, so it may be necessary that the heart need to work more and the RHR will rise.

The relationship between BPM (vertical axis) and BMI (body mass index / horizontal axis) looks like this. Even if BMI is too low or too high, there is an increase in BPM, which shows that the body moves most efficiently around BMI about 20 for women and about 23 for men. 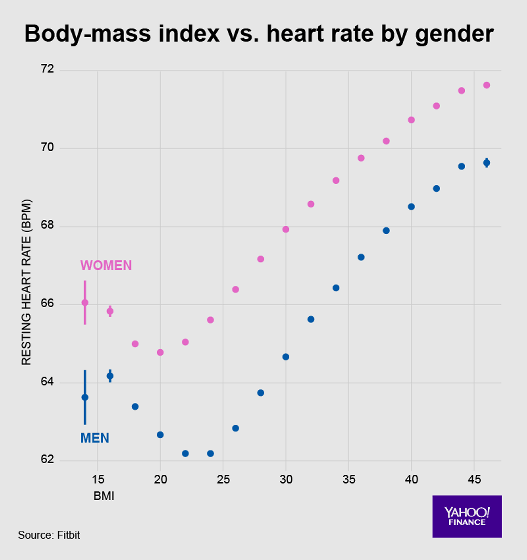 This is a graph showing the relationship between BPM (vertical axis) and exercise time per week (horizontal axis). Basically, BPM decreases as exercise time increases, but there is no significant difference in effect from around 200 minutes exercise per week. In other words, even if you do not increase your exercise time blindly, you should try exercising about 200 minutes a week. 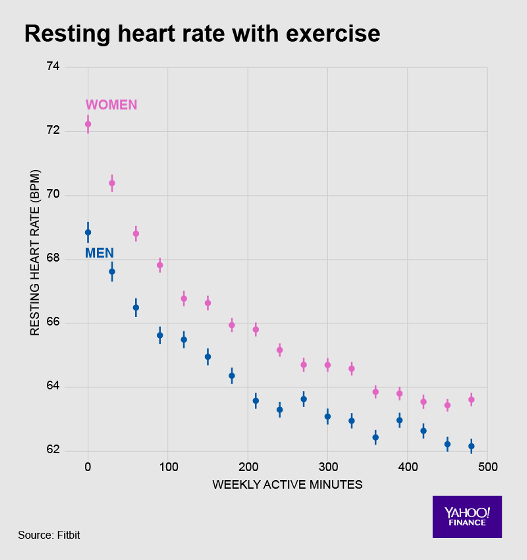 Looking at changes in RHR and exercise frequency by age, it looks like this. The younger the age, the easier it is to receive the benefit of 'reduction in RHR by exercise'. However, it does not mean that "RHR does not decrease even when exercising at older age", it seems that you can receive the benefits of exercise at any age. 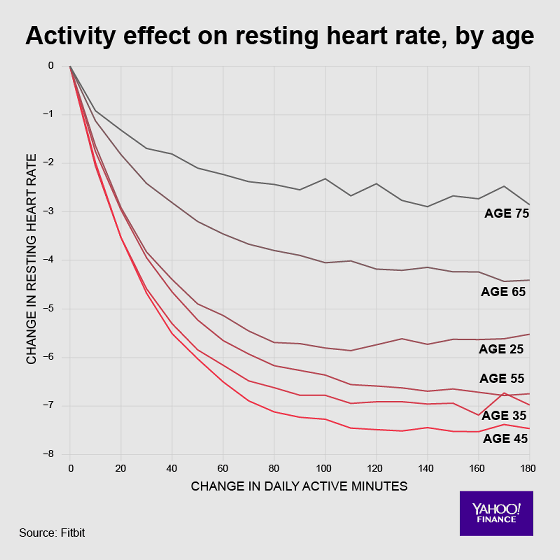 This is a graph of the relationship between BPM (vertical axis) and sleeping time (horizontal axis). Same as BMI, sleeping time too little or too much will raise BPM, there is a "sweet spot" of just the right degree. Contrary to the word "8 hour sleep", the sweet spot when viewed from the aspect of "heart health" is 7.25 hours. 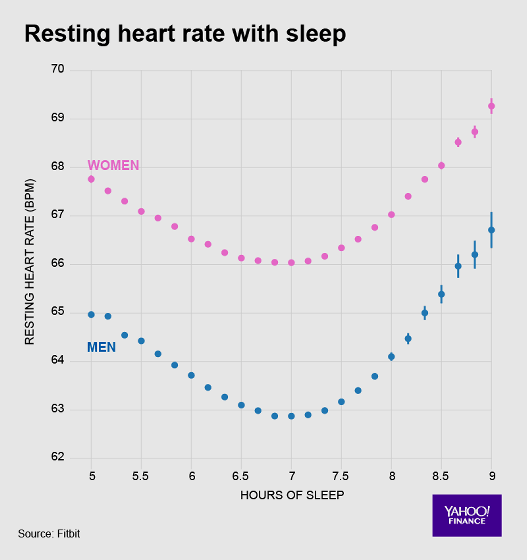 This is a graph that maps data of Fitbit wearers in 55 countries around BPM (vertical axis) and activity level (horizontal axis). Interestingly, even at the same age, gender, and exercise level, it was shown that there is a difference in BPM depending on the country. Even if the activity time per day is 55 minutes, the Costa Rican RHR is 62 beats and the Indian RHR is 70 beats. 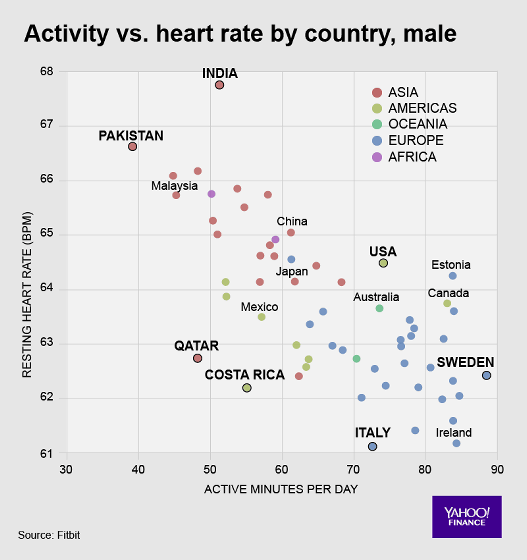 Because RHR is influenced by various factors besides exercise, Emir-Farinas thinks that there is a difference due to differences in nutritional status, BMI, gene, habit and medical treatment.

Also remarkable is that European countries have a higher level of exercise overall compared to other countries, but this is due to the urban design necessitating exercise in daily life . Also, researchers are concerned that Qatar has less RHR despite lower exercise level, which is related to blood pressure and the use of cardiac medications.

Yahoo! Finance columnist David Pogue compared the data of his data with his wife Nicky's data below. Although Pogue does not play a marathon at all, Nicky participated in the marathon contest the past 16 times and carefully about health so that it is said that "it was at the time of kindergarten who last consumed sugar and fat content" People there.

It is shown from the graph that Nikki who gives outstanding results in the number of steps / exercise time / non-REM sleep of one day has lower RHR. Meanwhile, Fitbit's data showed that Mr. Pogue had a good sleeping time. 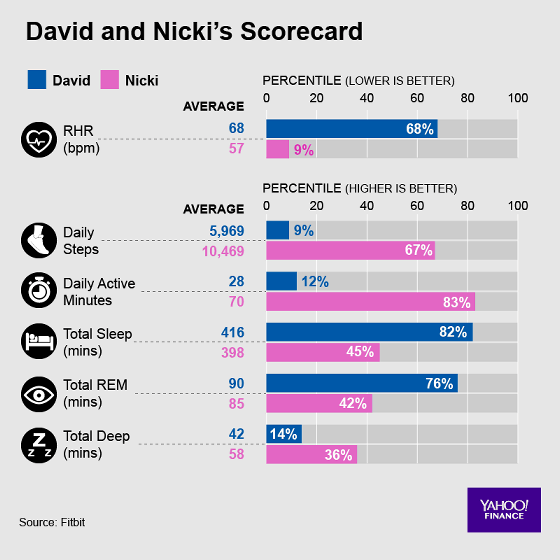 In addition, below shows what BPM will change at each event of Pogue's life. By starting regular training with a running machine (treadmill) , the heart rate dropped overall. And it turned out that kidney stones increased heart rate, holiday events such as Christmas / Thanksgiving / Family gathering were relaxing, increased stress and became a factor to raise heart rate It is. 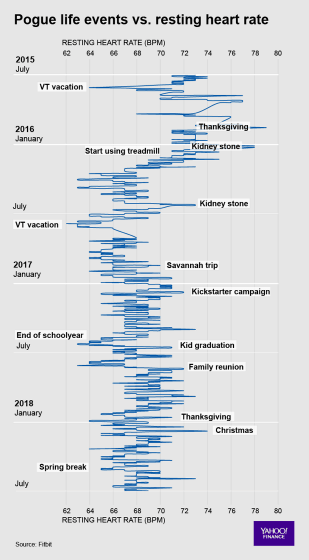