A new discovery in one of the mysteries of the universe 'High Speed ​​Radio Burst', the mystery deepens by recording the lowest frequency in the past 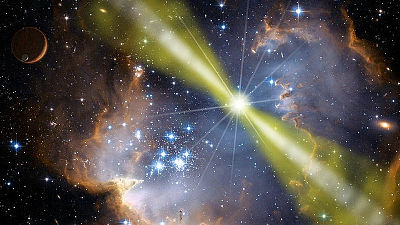 One of the unknown unknown astronomical phenomena " High Speed ​​Radio Burst (FRB)" is a phenomenon that a strong electromagnetic pulse with a length of about one thousandth of a second comes from somewhere in the universe. The high-speed radio burst observed for the first time in 2007 was a celestial event whose milestone is the source of the highlight, but it was announced that the observation data which further deepened the mystery was obtained.

This radio wave was received by the observation device "CHIME radio telescope (the Canadian Hydrogen Intensity Mapping Experiment)" installed at the Dominion Radio Observatory in Canada. CHIME is a radio telescope with four reflection devices and radio wave sensors at each focal point, it is possible to observe radio waves in the frequency range from 400 to 800 MHz every 1 ms. It is a high-performance observation device that can observe high-speed radio bursts in an area of ​​about 200 square degrees in real time. According to the principle of naming, the high-speed radio burst observed this time is called "FRB 180725 A" from that date. The graph showing the state of the radio waves is as follows. The yellow green part in the center shows radio waves, which shows that radio waves in the frequency range lower than 700 MHz were received in about 2 msec. Normally, high-speed radio bursts are radio waves of higher frequency, but FRB 180725A concentrates at 700 MHz or less, and in particular, it is a major feature that there is a noticeable peak around 580 MHz. The high-speed radio burst was the first phenomenon observed in 2007, and about 40 times of reception has been confirmed so far. The details are enveloped in mysteries, but it is thought that energy enough to emit the radio waves reaching from the distant universe to the earth is enormous, and the energy corresponding to 500 million times of the sun is instantly released It is also thought that it was done. It is not clear at all what kind of mechanism the radio waves are being released, but its origin is the activity of neutron stars , it is rich, it is rich, and the pulsar accompanied by the birth of a black hole and a accompanying star , A pulsar that caused implosion, and a type of celestial body called "Britzer" are considered as candidates of origin. In addition, hypotheses by Harvard researchers who assume that a huge spaceship by an alien is an electromagnetic wave emitted when the engine is started are popping out.

It is necessary to pay attention to the fact that this observation result is still before the peer review (peer review) by other scientists is done. Nonetheless, it seems to be said that it is an interesting event in the sense that the mystery of the universe further deepens.