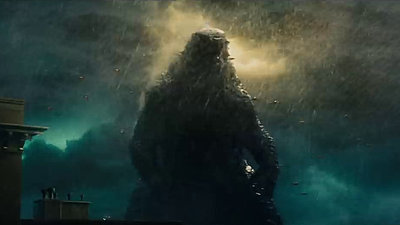 About the sequel to "Hollywood version" Godzilla "released in 2014" Godzilla: King of the Monsters ", following the establishment of the special site , the first bulletin of the official trailer has been released.

From the other side, a lump of mist that wraps around the building was flooded. "Mass mass extinction afraid began, the cause is us, narration that we were a pathogen".

The previous narration is the word of Dr. Emma Russell belonging to the research institution Monarch. Furthermore, the story continues, "As the living things do, the earth is" fever "to fight pathogens".

Dr. explains that it was "giant" that was created to fight pathogens.

Godzilla heading to heaven and spiraling a pale battle

Another monster appeared so as to widely spread the body from underwater.

In addition, another monster from the volcano ... ....

Is golden ray a gravitational ray?

The surroundings of the White House have become ruined

Three neck monsters that do not show clearly

Is the human being destroyed by the four monsters ...?

"Godzilla: King of the Monster" will be released nationwide on May 31, 2019. The date of release in Japan is undecided.