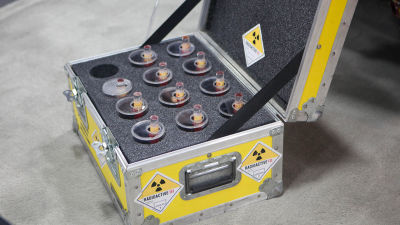 People who are "security experts" of the US government stayed in the hotel while leaving the plutonium and cesium recovered from the laboratory in their cars. After that, it turned out that the car was destroyed, the theft occurred, two radioactive substances were deprived, and it was not found yet.

Plutonium is missing, but the government says nothing | Center for Public Integrity
https://www.publicintegrity.org/2018/07/16/21834/plutonium-missing-government-says-nothing Theft occurred in March 2017. When a US government official stayed in San Antonio, Texas, I stayed overnight leaving plutonium and cesium recovered from a nonprofit laboratory in rented SUVs. When the "security experts" belonging to Idaho National Laboratory of the United States Department of Energy returned to the car the following day, it was discovered that the window of the car was broken and two radioactive substances were stolen. After that, as of July 2018, it is said that the lost radioactive substance was not found.

American non-profit research organization Center for Public Integrity According to the (CPI), such MUF (Material Unaccounted For / nuclear material unknown amount ) has been reported to amount to six tons of time 2012. Many of them are thought to be inaccurate records or those left in nuclear processing equipment, but some cases like 2017 are also included.

The National Security Agency refused to comment on the radioactive material that was stolen, but the publicity of Idaho National Laboratories stated that the lost plutonium is not enough to make nuclear bombs I am talking.

In addition, the San Antonio Police handed out a copy of the theft certificate to the news media The Register, and one of the two plain pelican cases with the Model 3030 Alpha-Beta Sample Counter plus the trial lines of plutonium 239 and cesium 137 The details that the source was put in have become clear.

Alan J. Kuperman, associate professor at LBJ School of Public Affairs at the University of Texas at Austin, states that the lost radioactive material is not "the amount of terrorists can make a nuclear bomb properly". 6kg of plutonium is required to make a bomb that was dropped in Nagasaki, but the amount of plutonium in the Pelican case is considered to be several grams, although it is not published, you can manufacture nuclear bombs It is not an amount. Also, cesium is not used for the manufacture of nuclear bombs. However, it is possible to cause large-scale pollution by dispersing them both. In 1987, radiation substances were brought out from medical equipment for radiotherapy which was left at the site of a waste hospital in Brazil, and hundreds of people were exposed to radiation. Although there is a possibility that the theft of this time did not know the possibility that he knew that the stolen person was a radioactive substance, "In any case, the government officials should not leave the radioactive material in the hotel parking lot" Kuperman says.