What is the distinctive brain of the legend 'Alex Ohnold' in the rock climbing world? 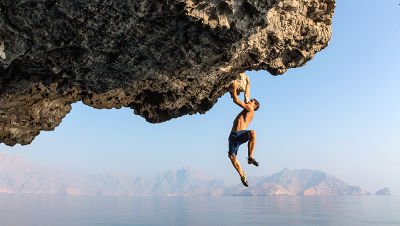 Rock climber Alex O'Holdo climbed El Capitan's climbing route "nose" in the world record of 2 hours 23 minutes 46 seconds and in 2017 El Capitan 's free of about 915 m in height Rider "as it climbs up without using tools, it is known as" Legend of the rock climbing world ". Many people tend to feel doubt that "Mr. Onold is able to repeat a rewarding challenge?", According to a neuroscientist who actually investigated Mr. Onodoru's brain, "Normal people are It seems that it has become clear that there are different brain functions ".

Legendary Rock Climber Alex Honnold Gets Put Into an MRI, and the Results Are Surprising
http://nautil.us/issue/61/coordinates/the-strange-brain-of-the-worlds-greatest-solo-climber-rp

Climbing rock walls without using protective equipment etc. In free solo · climbing it is said that if you accidentally fall at about 50 ft (about 15 m) from the ground it will directly lead to death. Such a free solo that is clearly "to die if failed" can be said to be a way to climb even experienced rock climbers. Climbers were thinking of Mr. Onodoru who had accumulated experience in the past as a "person who does not feel terror". However, Mr. Onold said, "I am nervous just by looking at my climbing video," claiming that he has the same horror feelings as the other climbers.

Jane Joseph who is a professor of neuroscience at South Carolina School of Medicine as well as other climbers has doubts that Mr. Onold has a different sense of fear than a normal climber? It began. Therefore, Mr. Joseph wanted to analyze Mr. Onodoru's brain using fMRI which can visualize the activity of the brain, asked Mr. Onold to "analyze the brain". Then Mr. Onold agreed to investigate his / her brain and analysis by fMRI will be realized. 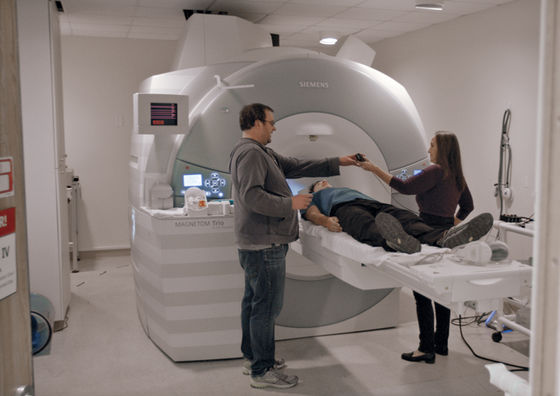 The following image shows the result of investigating Mr. Onnow's brain with fMRI when he actually felt terror. The left shows the brain of Mr. Onnow, the right shows the brain of the same-generation rock climber with Mr. and shows the place where the colored part is active when he feels fear. Comparing the two images, you can see that the climber on the right side shows that the amygdala of the white cruciform that works when feeling horror is working, but Mr. Onold said the amygdala part is not active, It became clear that I did not feel any fear at all.

It is known that another problem arises for those who do not function as amygdala like Mr. Onold. For example, in the case of a patient who developed Urbach-Beaté disease, which is known as a disease that destroys the amygdala, there are symptoms such as panic due to a problem that ordinary people do not mind, besides not feeling horror It may appear. However, Mr. Onold did not have such a problem, and Mr. Joseph who conducted all the exams also pushed "Him is a very healthy and unusual part", he said.

Mr. Onold said, "It has not been a reckless challenge against dangerous things from the beginning," and after a long effort of more than 10 years since 19 years old who began full-scale efforts to rock climbing, fear It was said that it was difficult to feel. Until then, he seems to have been shaken quickly by slipping his feet, going outside the course, encountering an unknown terrain, surprised by birds and other animals, but Mr. Onold said " I also experienced it many times and continued to overcome it, I was able to suppress my uneasy feeling naturally. "

Mary Monfort, an associate professor of psychology at the University of Texas, said that "it seems to be an overcoming process as per the textbook" about the history of overcoming Mr. Onodoro's fear, and remembers horrible memory as not terrifying It is as indicated in the research result suggesting that fear can be overcome by overwriting it with fear or adding another completely different interpretation from fear. Mr. Monthis said that while overcoming the process of overcoming Mr. Onold, he said, "If we can create the situation of experiencing fear over and over again and continue to overcome it, we will gradually fear You should be able to overcome it. " Mr. Onold says, "If there was no fear from the beginning, he will be able to act calmly," he believes that fear is a major cause of failure. According to Mr. Joseph, "Mr. Onold is much better than ordinary people, such as concentration, perseverance, planability, ability to see things", everyone is highly advanced like Mr. Onold He does not have the ability to do solo climbing. However, repeatedly experiencing fear repeatedly and overcoming may "be able to suppress fear and lead to the emergence of new courage," Joseph says.