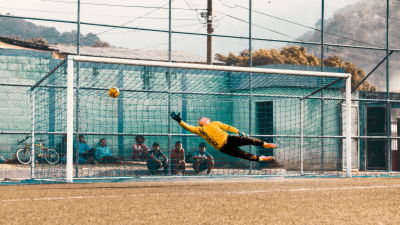 As Japan got to enter the world's first World Cup 8 and fought fiercely with the world's strongest Belgian national team and received great praise around the world , the world cup gets interested in football even those who do not usually watch It is a great opportunity. Oliver Staley who worked as a reporter for many years at Bloomberg and was working at Quartz, the news media, said that he was strongly attracted to football at such timing. Although the sights of the World Cup, such as hard tackle, brilliant pass work, and newly introduced VAR are various, Stairy feels dissatisfied with the irrationality of the penalty kick (PK) in particular.

It is a fact that PK has produced a lot of dramas in football, there is no room to put questions in there. At the 1994 FIFA World Cup final, the first PK fight in World Cup history took place. At the end of this PK game the Italian national ace Roberto Baggio kicked the ball a lot and the Italian national defeated. The word of Baggio when removing the PK and the word "only those who have the courage to kick PK" who can remove PK should still remain in the hearts of many football fans.


However, Mr. Stairy points out that "PK has too much influence on the final match result in games that do not score." For example, the 2018 FIFA World Cup final tournament round 1 match, Spain, the host country and Russia games were unable to reach the penalties in the extension game and eventually Russia I won. Mr. Stairy considers that PK warfare as a way to decide the winner of the final game itself is another problem itself, as Russia's representative scored the score taken by the PK during the game due to PK.


PK is given when a foul by opposing player occurs within an area called a penalty area existing before the goal, and the feature is that the kick is executed one to one between GK and kicker. Because PK is done from a penalty spot located 12 yards (about 10.97 meters) from the goal, the attacking kicker is overwhelmingly advantageous. In fact, the probability of determining a normal shot is 11% , while the success rate of PK is 76.8% . Considering this, it is clear that for many players there is a high probability that PK will score better than normal shoot.

The story returns to the game of Russia and Spain national team. Spain's representative Gerard Piquet took the hand that gives PK, and it was Russian national artist Juuba who struck the head of invitation. I can not tell if this heading ball was flying in the goal direction, if so, I could not know if GK could save, but "PK is an excessive high opportunity to score points than the lost score opportunity" Mr. Stairy. PK is given when a foul that prevents scoring opportunities is given, but the player who actually received the foul does not kick, and the player with the best kick at the team can kick it Therefore, "PK will be more advantageous to attackers," Mr. Stairy seems to appear in the eyes. In addition, players who are entrusted with a PK kicker on the team usually practice PK and kick PK in the game, so "I am accustomed to pressure and I can effectively kick in the production," Mr. Stairy . Indeed, Jamie Birdie who is active in Leicester City belonging to the Premier League has 20 points in the league during the 2017/2018 season, of which five are due to PK.

In the 2017/2018 season 's Premier League there were many cases that the total score of the game was 3 points or less. If PK is given in such a game, there is a good possibility that PK will become the final point as it is and decide the way of the game. Also, as can be seen from the high success rate, PK is a big reward for the players, and in modern football there are also facts that many plays like deceiving the referee are done to obtain this PK. In order to prevent this it is VAR that has appeared in recent years, but with the introduction of VAR there is also data that the judgment of PK has jumped out at the highest pace in the 2018 FIFA World Cup, and this will make the direction of the game unexpected Mr. Stairy seems to be worried that it will be twisted.

In such football, as one solution to correct irrationality by PK, Mr. Stayley said "Penalty spot is far from the goal by 15 to 20 yards (about 13.7 to 18.3 meters), raising the difficulty of PK It is cited. As a smarter solution, "classify the fouls in the penalty area into two types, play as to prevent excessive violent behavior and goals be PK, penalize for other obvious non-malicious fouls Giving an indirect free kick in the area "is cited. In this case, although the team receiving the foul clearly obtains a clear scoring opportunity, since the success rate is obviously lower than the PK, the influence on the game will not become dramatically higher than the PK, and Mr. Stairy predicts.