Is there "consciousness" in plants? Although it is generally thought that "a plant has no consciousness or intelligence", it seems that botanists and philosophers are seriously arguing that "Plants are conscious".

A debate over plant consciousness is forcing us to confront the limitations of the human mind - Quartz
https://qz.com/1294941/a-debate-over-plant-consciousness-is-forcing-us-to-confront-the-limitations-of-the-human-mind/

In 1880, he advocated the theory of evolutionCharles DarwinMr"Plant motive power"We announced the book" It is. Mr. Darwin's research result that caused the question "Is there a consciousness or intelligence in plants?" Has raised a big debate, and debate continues as to whether plants have consciousness even in the 21st century when more than a century passed. I will.

A botanist is a plant that transfers chemical substances through roots, branches, and leaves to each otherTalkThey claim to have very complex ecology. In addition, plants not only communicate information with each other, but also sometimes take altruistic actions such as nourishing nearby plants that are deficient in nutrition.

"Trees are talking and sending a complex social life," experts, can we understand the words of trees? 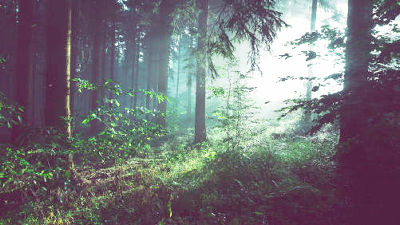 Plants also have roots stretching towards water,Listen to the soundIn addition to it, I have a mechanism to defend myself. Evolutionary ecologistMonica GallianoMrOgreI went usingExperiment in 2014Then we dropped the potted plants from a very low height and studied what kind of protective response the leaves of the ogreachi showed. Then, while the ogygisa had reacted so that the leaves would defend against the fall at the beginning, gradually learning that "there is no harm at the place where it was dropped", we took defensive reaction against the fall It seems that it is gone. From the above research, it is presumed that "Plants have learning function", but it is said that it is up to human recognition whether to call it "consciousness" or not. Botanist'sDevan meterMr. strongly opposed the opinion that plants are conscious, "There is no intellect and consciousness in plants if they say it without reserve."

In 2017, Mr. Meter says "stop the movement of plants by anesthesia"ExperimentThe we. Following the experimental result that the movement was lost from the plant by the anesthetic, the New York Times said, "Plants are conscious, because it means that the consciousness of plants was lost by anesthesia, It is because it is because there was an article ".

For the article of the New York Times, Mr. Meter has announced an opinion opposed to saying that "logic leap is occurring between articles based on the experimental results that I published." "First of all, the definition of" consciousness "is shaking even when talking about humans and animals Secondly, plants do not have a nervous system which at least exists in animals Thirdly , Many of the mechanisms by which anesthetics act on humans and animals are enigmatic, but it is not the reason why anesthetics should not cause chemical effects on plants, "Mr. Meta said Although it is not wrong to emphasize the complexity of plants, it shows that it is not necessary to speak in an anthropomorphic way. He is the director of the plant research center of Tel Aviv UniversityDaniel ChamoviczLike Mr. Meter, Mr. Meter said the plant has a very complex mechanism, but he does not have consciousness or intelligence. "All organisms, including bacteria, have an amazing function to survive, plants do not recognize themselves, so that as we care about other people, the plants do not have other We do not care about plants, "Chamovitz said.

On the other hand, he is a professor of philosophy at the University of BasqueMichael MurderMr. said, "Humans are underestimating plants," plants claim that they care about their surroundings and also have intelligence. According to Mr. Murder, the plant gathers information on the surrounding environment and has a function to regulate the flowering time in response to changes in the temperature and the like, so that "knowledge has consciousness If you define it, the plant has consciousness. " Mr. Galliano, who conducted experiments on the learning function of Ogregiso, as Mr. Murder claimed, "Plants do not have central nervous system like humans and other animals, but act like creatures with intelligence" doing. Mr. Galliano knows the dangers of researchers to personify and talk of plants, but since the awareness of plants is greatly different from human consciousness, unless it is personified and claimed, people It is said that it can not be understood.

Admitting that "there is consciousness in plants" can lead to the assertion that "making salads and cutting trees to build a house is also a kind of killing", in a sense very much It is a delicate problem. However, it can be said that expanding the definition of consciousness and intelligence to plants further recognizes that general recognition has been limited so far and leads to new discoveries.