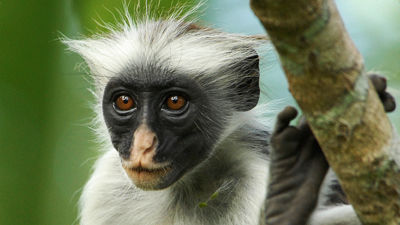 Some wild monkeys are caught by poachers in Africa and others and illegally sold and trapped, there are some threatened with extinction. Efforts are underway to protect such valuable wild monkeys by making full use of image recognition software.

Monkeys such as Wolverine lemur who lives on Madagascar Island have been captured for pet purposes and the number of individuals is decreasing. There are also monkeys at risk of extinction, so various efforts to protect monkeys are taking place. It is necessary to capture and observe in order to protect the wild monkey, but if you capture it and attach a tracking terminal etc. and attach it back to the wild again without giving injuries, it stresses the physical and mind of the monkey In the worst case there was a danger of letting you die, and there was a problem that it was also expensive to cost $ 400 to $ 4000 (about 44,000 to 440,000 yen).

In order to solve this problem, Dr. Anne Jane's research team at Michigan State University developed a system "PrimeNet" that can identify wild monkeys without capturing by image recognition software. The research team started with preparing image datasets of three monkeys of golden monkey, wolverine lemur, and chimpanzee, and made monkeys recognize by training the neural network using the created dataset. A corresponding Android application "PrimeID" has also been developed so that the system can be used more easily, said that the data set was created efficiently by shooting wild monkeys with a smartphone camera.

The identification accuracy of the developed PrimeNet monkeys was recorded to nearly 90%, and at Woof lemur, the high accuracy of 93.75% was achieved. It is said that it has become possible to manage wild monkeys in a non-invasive way by this. In the future, by enriching the database utilizing PrimeNet, a tracking system will be constructed that can discriminate that the monkey traded is illegally captured by the poacher, and there is a plan to deter future poaching I will.