Why did Leonardo da Vinci's "lost painting" found worth 1.8 billion yen found to be genuine? Paintings brought to the French auction houseLeonardo da VinciIt was estimated in 2016 that its value was estimated to exceed 1.8 billion yen. Noh painter painted hundreds of years ago was not copying or fake (gangs), but what kind of circumstances existed for Mr. Noah Charney to be judged as his work by Da Vinci himself I explain it.

In March 2016, the former doctor who retired brought in a piece of painting to "Tajin auction" in Paris.St. SebastianPainting depicting the painting was one of 14 sheets collected by the doctor's father without putting it in his forehead and the appraisal was carried out by several experts including curators of the Metropolitan Museum of Art and how the Renaissance period As a painter, Leonardo da Vinci's workI have concluded.

The news at that time can be read from the following. 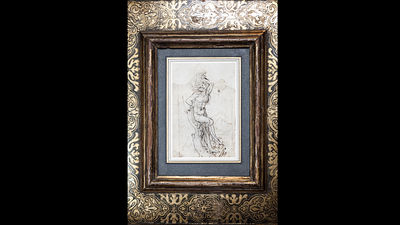 On the back side is a sketch of light and shadow drawn with notes seen as Da Vinci's. The French government agreed with the expert's opinion that this painting is "treasure of the country", "rare item", and that the work is not doubtful that the work was drawn by Da Vinci. So why can you assert that it is from Da Vinci, why it was a work drawn hundreds of years ago.

Paintings brought to the Tajian auction areOld masterMr. Thaddée Prate, who is an expert in the field, and then to Mr. Patrick de Bayser, a local expert. Mr. de Bayser for a momentMichelangeloIt was thought that it was a work of Da Vinci, not Michelangelo, as the technique reminded me of the earliest Da Vinci, and because I could judge that the painter is left-handed from how to draw shadows It seems to have come to think. And on sketch about light and shadow on the back side and sentences written with left hand, de Bayser was excited. Da Vinci is left-handed, but because he did not include left-handed painters among his disciples.

After that, Mr. de Bayser contacted Mr. Carmen C Bambach curator of Italian · Spanish painting enrolled in the Metropolitan Museum of Art. Mr. Bambach was a person who edited the catalog of Da Vinci's exhibition at the Metropolitan Museum of Art in 2003. For Da Vinci, academically, Martin Kemp, an art historian at Oxford University, is famous, but as C Bambach was more professional about paintings, Mr. Bayser told the other party to contact He said he chose Bambach. Mr. Bambach showed the idea that paintings are "undoubtedly" of Da Vinci. The paintings of St. Sebastian discovered in 2016 were scheduled for auction in June 2017, but eventually it was decided to take over by the Louvre Museum rather than an auction. It is seen that it would have been an extraordinary price if it was put on an auction.

It is said that St. Sebastian's painting was convincing many experts about the results of scientific analysis. However, despite being anonymous, the prominent Da Vinci experts say that it shows a view that "I am not convinced of all the explanation that paintings belong to Da Vinci".

This has to do with the fact that the world of painting is made up of elites. Tajan's auction house where St. Sebastian's painting was discovered did not publicly announce the results of the survey, and in the art world "We are experts and have knowledge that the general people do not have , I can tell you what is real or not ". There are three steps to judge whether the painting is genuine or not, examination of scouts and scientific analysis, and these steps are trampled on St Sebastian's painting, but the information is mostly It is not made public.

The painting of St. Sebastian is not a finished work, it is unclear what he was trying to write. Art critic Jonathan Jones said to the painting, "There are ink stains in the hand raised by the person and the shave of the belly button, this ink puddle is unique to Leonardo, for me this is a big hint." I commented. Although this is a fact, the part "for me" is also very important. In other words, judgment of a work of art is very subjective. Nonetheless, there are reasonable reasons in the three steps of painting's discrimination, investigating outreach and scientific analysis.

In painting 's discrimination, first you can see the type of pen and brush you are using, then you can see how the handwriting moves. Then, where the ink is accumulated afterwards, etc. are examined, and by comparing all these, it is examined who was drawn. Even if a copy is drawn in front of the original work, since it seems that there are few painters who care about ink puddles, it is a great clue in identifying whether the shape of the ink pool is genuine or fake .

Paintings that have completed the discrimination will be surveyed next. In the survey of goals, it is examined whether the existence of a historical document on the possession of a painting and the existence of a painting are consistent. Speaking of St. Sebastian's painting, Da Vinci wrote in his own note that he drew eight sketches of St. Sebastian as preparation for the incomplete work. One of them was already discovered, and it was thought that the sketch discovered in 2016 was the second one.

Also, it is not disclosed what type of owner the painting has been made public, but Tajan's auction house should have heard a detailed story to the doctor who brought the picture. The fact that the picture is neither stolen nor sculpted, and the more clear the background is, the more reliable the picture is. Mr. de Bayser does not grasp all the stories, but "13 paintings brought with St Sebastian's paintings were from Old Master and some were duplicates. Three excellent quality stuff, but the author is unknown.The interesting thing is that it was all put in the picture frame made around 1900 and handwritten letters were engraved on the picture frame. It is seen that it was in a big album because of the trace, "he says about some backgrounds. And the third step is scientific analysis. By non-invasive scientific tests, we can clarify the age in which the picture was drawn. However, in this test, I do not know that there are some authors of the picture.

In fact, scientific analysis is rarely taken as an approach to painting. Even expensive paintings will be sold at the stage when much research finishes investigation of the discrimination and ministry. Scientific analysis is done mainly when doubts arise in the results of examination of the discrimination or goal, or when the owner of the painting reveals that there is a suspicious part. However, in the case of St. Sebastian's painting, the French government, who wanted to keep paintings in the country, tested in November 2016 to make sure that the painting is of Da Vinci It was. In other words, this time there was no doubt, and the test results also showed age that it seems reasonable even if Da Vinci possess it.

However, there are imitation items that trick the expert's eyes.Han van MechelenWas known for skillfully cheating experts in Vermeer's counterfeit and acknowledged by researchers that Mae Helen's "Emmao's meal" was "a collection of Vermeel that had been lost for a long time" There was something that was being done. Later, Mechelen prove that he made fake works himself by drawing Vermeer-style painting in the courtroom. Details of scientific analysis are not made public, but in recent years there have been dealers and painter owners who take into consideration transparency by disclosing information on the findings of the work. However, as of 2018 it can be said that the evidence that the public can believe that Da Vinci is genuine is "because the Louvre Museum picked it up."

Even when Salvatore · Mundi once judged to be "duplicate" got the evaluation "it is genuine", there was work of experts. At this time we analyze art and investigateArt Analysis & ResearchMr. Nica Gutman Rieppi took charge of the research over the years and reassured scholars and potential buyers by conducting scientific analyzes. However, at this time, one factor that caused people to believe that the painting is genuine is that of LondonNational GalleryIt was the fact that the exhibition was held at.