China's space station "Amenomi No. 1" was coincidentally the most distant from the land and seems to have fallen into a sea area called "grave ground of artificial satellite" China's space station in China which had fallen into the state of "control unable" after the operation and leaving it to the attraction of the earthAmemiya 1"Entered the Earth's atmosphere at last until April 2, 2018 and came to the end. The probability of falling into the area where people live and causing damage1/3 trillionAlthough it was also called Amemiya No. 1, it seems that it eventually fell as far as the earth from the land and the remains of many artificial satellites sleep "Point · Nemo"It is known that it was an area deviated from hundreds to thousands of kilometers. In this way, it is very difficult for humans to reach by ship, and even if they reach it, Point Nemo has no sightseeing spots there. Even if I make a desperate feeling, there is nothing that aims at this point because there is not much to be obtained by simply convincing "Oh, here?" In front of the ocean. In other words, it can be said that it is "a place where the possibility of existence of the most human beings on the earth is low", so it can be said that it is a good point as a "disposal site of artificial satellite".

In fact, Point Nemo is another nameSpace craft · cemetary(Graveyard of spacecraft), since 1971 a total of 260 spacecraft have been dumped to this point. The most common are Russia including the Soviet era, the space station "mealDumping over 190 machines and more. This is followed by the United States (52 aircraft), Europe (8 aircraft) and Japan (6 aircraft). In addition, the International Space Station (ISS) scheduled to be shut down in the 2020s is finally determined to be dropped in this area.

And this time it is believed that China 's Imperial Palace No. 1 also fell near this area. This is of course "a completely coincidental", but it seems to be said that human beings are relieved to be relieved that human beings are relieved that falling into areas where the damage is minimized. Although it seems that it is not easy to identify the exact location, it is predicted that Amemiya 1 falls to the waters close to the Samoan islands several thousand km southwest from Point · Nemo, judging from the last trajectory.


NW of Tahiti - it managed to miss the 'spacecraft graveyard' which which further south!pic.twitter.com/Sj4e42O7Dc


Initially it was Tianyi No. 1, which had only a roughly rough fall forecast of "somewhere in the 43 ° N to 43 ° S south", but eventually it was said that it fell to the safest place for humanity in the end, Perhaps a lot of people, including the Chinese government, are losing their hearts. Although it seems that direct damage did not reach Japan in that it fell to the ocean far from Japan, it is not necessarily the case that the debris does not come to Japan on the current of the tide. Even if you find some kind of parts, if you return home with you without permission, it may be a problem later, so it's ok to take measures such as reporting to the police with care as in the following article .

What should I do if I find the remnants of the Chinese space station falling out of space because of uncontrollable? - GIGAZINE 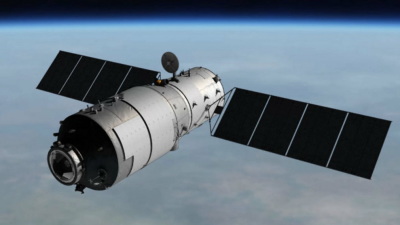