SpaceX's "SpaceX" which launches a small satellite with 4000 or more groups in orbit around the earth to create a huge broadband communication network and delivers the Internet to every corner of the earthStarlink"The project was announced that it was approved by the Federal Communications Commission of the United States (FCC). In fact the operation begins, it will be expected to pay the price for about 5000 yen per month by installing the antenna of the notebook PC about the size of anywhere in the world it is possible to high-speed Internet connection.

On March 29, 2018, the FCC built 4425 non-stationary satellites for "Space Exploration Holdings, LLC" serving the service under the name SpaceX, and by using satellites to communicate Work to do "Fixed satellite serviceWe have certified to operate around the worldAnnounced. As a result, SpaceX became the first company in the world to be authorized to offer broadband network service using satellite network, and the go-ahead was given to the plan to seriously provide the Internet environment to every part of the earth in full swing .

There is not much feeling when you live in Japan that is relatively narrow country, but there are places where it is not easy to secure a fast enough internet environment in the country wide in the country and the continental countries of Africa. There are wired systems that draw cables to the place of use and wireless systems that deliver radio waves by building wireless base stations in certain areas, but in either case they are costly to develop infrastructure, remote areas and population It is not possible to proceed with maintenance quite easily in terms of cost in areas where there is little. For that reason there is a problem that existence of "digital divide" which is a barrier to the digital environment that can not access sufficient net environments.

In order to solve such a problem, Starlink aims to provide internet environment anytime and anywhere by transmitting and receiving radio waves from outer space. Eleon Mask CEO of SpaceX has been promoting this plan from around 2015 and finally we have completed a major step towards realizing that.

SpaceX has already launched a satellite for Starlink realization. In February 2018 SpaceX launched two artificial satellites for Starlink "Microsat - 2a" and "Microsat - 2 b", and from the earth orbit around altitude of 1000 kmKu band(12 ~ 14 GHz) signals are being transmitted and received. 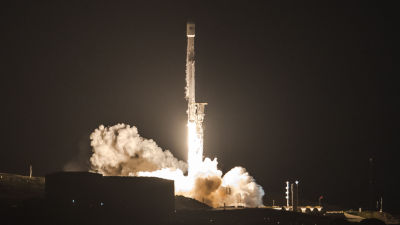 Actually it will take some more time for the launch of 4425 satellites to complete, but it is planned that the launch will be carried out sequentially using SpaceX's Falcon 9 rocket and Falcon Heavy rocket. The FCC is requesting that half of the 4,000 satellites be launched in the next 6 years. The FCC announced a statement to the American television station CNBC "With this decision, the FCC has taken a new step to raise the availability and competitiveness of the American high-speed broadband network."

SpaceX spokeswoman also told The Verge, "We are thankful for the detailed verification by the FCC. There is still much to do in order to shape this complex system, The decision of this time is to make SpaceX a next-generation satellite network, provide a broadband service with high reliability and low use cost all over the world, so that we can provide internet environment to people who can not use the Internet now It is an important step to do. "

YouTube has posted a movie depicting how it will actually look when 4000 satellites orbiting the earth.


Reddit also has a thread to explain the details of the Starlink plan.

I picked up the main explanation and it looks like the following. Please check the full picture on Reddit's page.

About satellite to be launched
· According to the application documents, the weight of one artificial satellite is 386 kg
· Satellite photography service and remote sensing, including functions for aerial surveying
· Lifespan is 5 years
· After the operation is completed, let it rush into the atmosphere and dispose of it
- First 1600 units were launched, then 2825 units were launched. Starting actual service provision from the stage when 800 launch is completed.

In "Phase 2", 75,100 satellites are launched into VLEO (very-low-Earth orbit) with a lower altitude to improve communication bandwidth and ping speed

Antennas necessary for receiving radio waves
Delivery pizza box, or planar phased array antenna with the size of notebook PC is necessary. The price is around 100 dollars to 300 dollars. (About 11,000 yen to 32,000 yen)
The antenna is installed outdoors such as the roof at an angle that the satellite can see through towards the sky.
With this antenna, it is possible to send and receive at the gigabit level.

Estimated monthly usage fee
It is forecast stage, but it is predicted that it will be less than 50 dollars a month (about 5300 yen).

Expectable communication speed
Unknown because nothing has been announced yet for details yet.

Types of network provided
Simple than IPv6 and small packet overhead. (peer-to-peer method)
End-to-end encryption at the firmware level, difficult to decipher with modern technology. The encryption technology will be updated according to evolution.

Relationship with Google
Google is committed to investing in hundreds of billions of yen in SpaceX. Rumor that she shares technology with Google's artificial satellite.

Advantages of Satellite Broadband on Optical Fiber Network
· Although the transmission speed of the optical fiber decreases from 31% to 50% of the light, the radio wave in the vacuum proceeds completely at the light speed.
· There are various restrictions on the installation of optical fiber, but radio waves from artificial satellite are not regulated.

Disadvantages of satellite broadband
· It is easy to overload if communication concentrates in populated areas
· Communication radio waves may be attenuated due to weather
· It may be destroyed by space debris etc.