Decide the world champion of the football national team every four yearsFIFA World CupThe 2018 convention will be held in Russia from 14th June to 15th July. Politicians in the UK who are scattering intense sparks with Russia on suspicion of assassination attempts of the former Spy showed the view that President Putin is trying to use the World Cup, as Hitler used the Olympics, In addition, Foreign Minister Boris Johnson, who is in charge of foreign policy, has come to the point of expressing his opinion that "that view is correct".

This statement came out during a meeting of the diplomatic special committee held on former Russian spies assassination cases occurred in the southern city of Salisbury, England. Labor party Ian Austin said, "Putin gives the trophy to the captain of the World Cup winner country, President Putin will take advantage of the tournament to PR for the trophy to properly puncture the violent and corrupt government's side led by himself Mr. Johnson, a former London mayor and former Federal Minister for Foreign Affairs / Federal Council Mei Cabinet from July 2016, said, "Unfortunately it is totally correct "It is accurate to compare your expression of what happens in Moscow during World Cup with the event in 1936." Mr. Johnson also said that he will hold an "urgent meeting" with Russia on the safety of fans visiting the site during the World Cup period. Mr. Johnson talks about "the event of 1936" was held under the administration of the Nazi Party led by Adolf Hitler1936 Berlin OlympicsIt refers to that. It is said that Hitler had aimed to "inform the Aryan's excellence" by holding this tournament, and Hitler uses the convention as a tool of its propaganda and it is a general view that it was beautified is.

It is that Mr. Austin and Mr. Johnson say that it is trying to utilize the World Cup for beautification with Russian propaganda like this Hitler.

In Britain on March 4, 2018, an attempted poisoning attempt against the former double spy of Russia has occurred, and the May administration declared that the mastermind is the Russian government. Russia denies this, but the British government deported 23 foreign diplomats including Russian ambassador to the UK in retaliatory measures. Russia also plans to withdraw Russian diplomats from abroad, such as intense competition spreading between the two countries. The remark of this time has come out in such a way and it can be said that comparing with Hitler who is regarded as one taboo in Europe has a big meaning.

This case was a former intelligence agency of Russia who was exiled to England and Mr. Sergei Scrivari and his daughter were about to be assassinated using a nerve agent "Nobi chok". Russia's involvement is strongly suspected, as this chemical is more sophisticated than chemical weapons such as sarin and VX gases and can not be manufactured at levels other than the state's involvement level.

What is sophisticated nerve agent "Novichok" rather than sarin and VX used in Russia's double spy assassination attempted case? - GIGAZINE 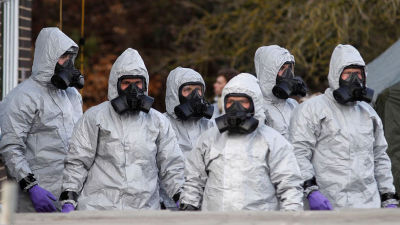 In response to Johnson 's remarks, the public relations officer at the British Prime Minister' s official residence has expressed that he is representing the government 's position and working closely with the police on the World Cup plan. This includes the meaning that Russia needs to guarantee the safety of British residents living in Russia, following the deportation of 23 Russian diplomats and other diplomats from the country. Some officials who have been departed from Russia contain persons responsible for the safety of British living in Russia and it is essential to take measures different from ordinary in the absence of that person I will.

As the opening came closer, there were 24,000 applications for traveling in the UK to watch the World Cup. Mr. Johnson said, "Although the number of people is decreasing, I do not have a deep concern about how British citizens are handled, although the Rio / Olympic Games in 2014 is a downward trend because of 94,000 applications at the same stage It will not be a case, "he says to take necessary measures for the protection of the people.

Mr Austin claimed that teams from the United Kingdom should participate in the competition, while Johnson said, "Fans looking forward to the tournament and a long time and a life towards the tournament It is a mistake to impose punishment on the players who have made efforts at the expense of sacrificing it, "he reveals a negative view on boycotting the tournament.