BMW's high performance model which was held on November 23, 2017BMW M5The challenge of "Leaving 8 hours drift" challenged the fact that another M5 was drifted next to the drifting M5 to lubricate the gasoline. Indeed it was a big challenge not to be frontal unexpected, but actuallyBluetooth transceiver malfunctionIt seems that there was a possibility that it was supposed that there was no choice but to interrupt the challenge.

BMW and the company's test driverJohann SchwarzThey set down Guinness World Records by devising the minor "drift refueling". The way that two drivers and one lucker breathe in breath and manipulating cars with superb control are refueled in detail in the following article. 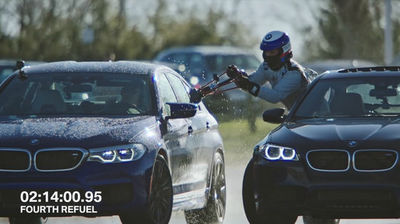 If you just drift, it is not too difficult for drivers who have practiced to a certain extent. However, with this challenge, it was necessary for a number of staff members to work together while working together. Therefore, the team seems to have prepared a position to make necessary communication by bringing a handy transceiver to the driver.

Shortly after the challenge started, it turned out that inconvenience occurred in the handy transceiver. In doing drifting that requires handling both hands and both legs well, it was found that detaching one hand from the steering wheel caused a big hindrance to the operation, for a short period of time, so the team prepared for backup We changed to policy to use the transceiver application of Oita smartphone. A good point of the transceiver application is that you can use the handsfree function that allows you to talk while holding the steering wheel with both hands. The team was preparing to make a hands-free conversation by connecting this smartphone to the car infotainment system via Bluetooth.

However, in the meantime, after a while that the Bluetooth connection has been broken for some time, we face troubles. If you can not use even the backup, the means of communication with the driver will be cut off. Driver Mr. Schwarz seems to have tried to reconnect to the car infotainment system by operating the smartphone while driving driftingly, sometimes restarting the terminal.

In addition to this, Mr. Schwarz said that he encountered various troubles. The case where the snacks prepared as a supplementary meal while driving rolled around in the car was the beginning of the story, when six hours passed since the start when the vehicle drive system switched from the rear wheel drive to the four wheel drive for some reason He really said he was in a pinch. The rear wheel drive system is optimal for drifting and the driving characteristics change significantly with four-wheel drive, so you can not deal with a driver with a very good skill. Moreover, it can not escape from the problem of "toilet". However, Mr. Schwarz, who is also a driver of the endurance race, is a "pro" and that he will take every means to achieve his goal. In challenging this challenge, Mr. Schwarz told The Verge that he had prepared a position to deal with without trouble even when urinating over urinating by "inserting" a catheter for medical use in a pushed manner It is.

In the following movies, all the challenges of such Schwartz 's challenges are summarized. Unfortunately (?) Catheters and Bluetooth cases are not mentioned here, but you can see in detail the state of "drift lubrication" which is just a virtuosity.