Based on information from Apple-related suppliers in Taiwan, it is reported that "There is a possibility that Apple will release several new products in March 2018".

IT information and suppliers related news in China and TaiwanDIGITIMESAccording to the report, suppliers such as "Career Technology", "E & amp; R Engineering", "ShunSin Technology", "Superior Plating Technology" etc. will be available in Taiwan while there are suppliers who will receive the aftermath of "iPhone X reduction production" in Taiwan , It is clear that it is in a state where it is expected to increase orders. Among them, it seems that suppliers who receive new orders from Apple are also included. One of them, Superior Plating Technology (SPT) is a company specializing in very beautiful plating, starting production from March 2018 as receiving orders from Apple for parts for the next generation iPhone, iPad, MacBook It is likely that it is likely to be very high. Although the performance of SPT was stagnant in 2017 from the beginning of the year for three quarters, it is thought that the performance will improve at a moment in 2018 when orders from Apple are almost certainly confirmed.

In recent years Apple has tended to announce new products in March, and in 2017 a new color of iPhone 7 "PRODUCT (RED)", cheap versions of iPad, iPhone SE and others were announced. Therefore, it seems that there is a high possibility that some new product will appear in March 2018, but DIGITIMES does not disclose details of the product.

Cyclically, it is also expected that a new iPhone SE and iPad will be announced in March, but there is also a view that iPhone SE is hopelessly expected as follows. In addition, most observations say that it is impossible to expect the new iPad equipped with Face ID to appear until the end of 2018. Also, it is certain that it will be September 2018 about iPhone X, iPhone 8 just released in September 2017, and successor to Apple Watch.

Is the appearance of the palm-sized new iPhone "iPhone SE 2" pear? A famous analyst's view looks something like this - GIGAZINE 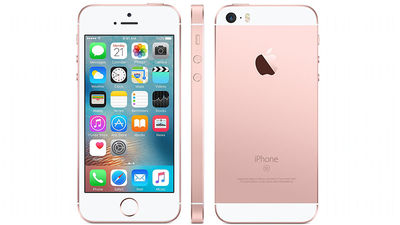