Provide cloud storage serviceBackblazeAnnounced the 2017 version of failure rate data of the hard disk (HDD) of the storage center operated by the company. The model-specific data of the total HDD of over 90,000 HDDs has become obvious.

The error rate of Q4 (October to December) in 2017 is as follows. Data on models with less than 45 installations are excluded. Seagate's 4 TB model "ST 4000 DM 00 5" is revealing outstanding error rates at a glance. However, note that this is due to malfunction of one of the 60 HDDs being operated and it is extremely high because the total number of working days is as low as 1255 days, so it can not be said that it is easy to break down immediately Is required.For enterprise model "ST 8000 NM 055" which was introduced in large quantity in Q1 (January to March) in 2017The error rate is as low as 1.22%, it has been introduced in large quantities even afterwards, and seems to be becoming the main model of Backblaze storage. Although Backblaze operates a large amount of HDDs, as the demand for cloud storage services increases, the capacity of HDDs to be operated is also changing. The most used through 2017 is the 4 TB model with the lowest unit cost price, accounting for a majority. However, introduction of a large capacity model exceeding 10 TB has begun, and the trend of shifting to a large capacity model will continue even after 2018. The error rate for the full year of 2017 is as follows. Except for 'HUH 728080 ALE 600', which has a shallow operation history, all HGST HDDs are as excellent as everyday conversion error rate is less than 1%. It is expensive compared with other models, but it has become high reliability corresponding to it. Besides that, Seagate's models with capacities of 6 TB or more are all error rates as strong as 1% and very good grades. It can be nodded that mass introduction is done. ·bonus
On January 30, 2018, the HDD capacity managed by Backblaze isOver 500 PB (500 thousand TB)It was revealed that it did. Among the many companies that cloud storage competition intensified and many of the companies stopped capacity unlimited plans, we stated "Strage Pod" developed in-house as a reason why Backblaze could maintain affordable price while maintaining unlimited plan. In addition, you can see what kind of storage machine Strage Pod is in the following article. 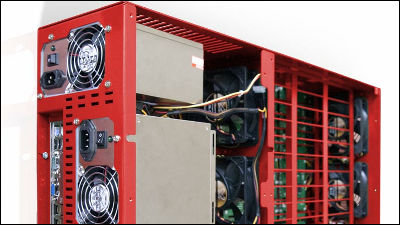