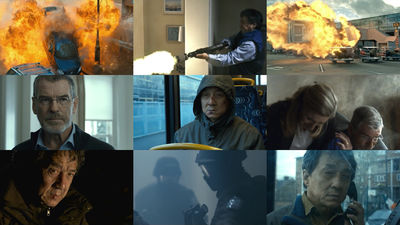 The trailer for the movie ' The Foreigner, ' co-starring action star Jackie Chan and predecessor James Bond, Pierce Brosnan , has been released.


Jackie plays Newen Nyok Min, who runs a Chinese restaurant in London. I just sent my daughter by car.

After a while my daughter got out of the car ...

An explosion occurred nearby.

Min loses his daughter and Min himself is injured.

This is Hennessy, a politician played by Pierce Brosnan.

Min was visiting the office for 5 consecutive days.

Min asks if he can somehow know the name of the bomber.

'I'm doing it for the government, not for the terrorists,' says Hennessy, but Min finds out that Hennessy is a politician with IRA roots. Still, Hennessy rushes if he doesn't know the name of the criminal.

A man who seems to be the criminal who is creating a gimmick ...

Negotiations between Min and Hennessy broke down.

Min urges 'Tell me the name of the bomber'

Hennessy learns that Min is not just the owner of a Chinese restaurant, but from special forces.

'I think he knows who was the one who blew his daughter away,' said Hennessy, who was frustrated.

Don't say no, don't say anything.

And the composition seems to be Min vs. Hennessy ...

Min was lurking under the fallen leaves.

It was quickly hidden by a sheet of fallen leaves.

Of course, it's not just suspense, it also includes action elements.

Successful invasion into the room

However, the vigilant trio demanded that the bag be opened.

There are tapes in the bag ...

A gun was hidden under it. The moment he finds out that he has been caught, Min starts kicking the man in front of him.

And to the shootout.

I'm not where I should have been lurking ...?

When I think about it, Min attacks from overhead.

Where is the destination of the revenge drama ...?

'The Foreigner' will be released nationwide on October 13, 2017. It will be released on September 30th in China, and the release schedule in Japan is undecided at the time of article publication. (Later, released in May 2019)