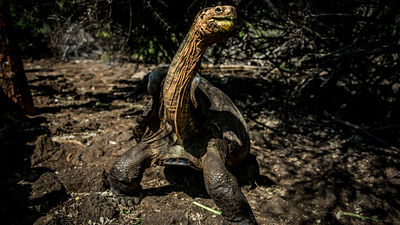 The unique ecosystem of the Galapagos Islands leaves hundreds of species that have been around for hundreds of years, often left behind on the verge of extinction. Famous of these are the Pintas tortoise '

Lonesome George ', a subspecies of the Galapagos tortoise, and the ' Espagnola tortoise', Diego . Both were near-extinction as solids that lived for nearly a century, but unlike George, who was assigned a female of a nearby subspecies but ended his life without leaving any offspring, Diego had only one. It is known as an unprecedented turtle that saved 300 to 800 offspring and saved its own race.

Espanola giant tortoise (Chelonoidis hoodensis) is a species of giant tortoise whose population has been reduced to several dozen in the 1970s, and at that time most of the survival of Espanola giant tortoises was female. Diego is a male Espanola tortoise that was bred at the San Diego Zoo and was protected in 1977 at a breeding center in the Galapagos Islands. Although the average life expectancy of the Galapagos tortoise is over 100 years old, Diego, who was already over 100 years old, began breeding with females who were females to avoid extinction, saving the race from extinction. Is known for

A female Espanola giant tortoise captured by volunteers and sent to Diego. It has been confirmed that the population of the Diego tribe has already recovered to more than 1,000 on Espanola Island, the Galapagos Islands. The descendants of the Espanola giant tortoise born from Diego have an increasing number of individuals resembling Diego, but this appears to be due to a phenomenon called '

bottleneck effect ' in population genetics. If the number increases due to the bottleneck effect, the population becomes low in genetic diversity, and it has the disadvantage of being vulnerable to diseases and climate change. However, although little known, there are also male Espanola tortoises called 'No. 3' in addition to Diego, and not all of the current Espanola tortoises are descendants of Diego.

Lingham George, a pinter giant tortoise (Geochelone abingdoni) who was also over 100 years old, rarely mates with females even after being protected, and it is seen that the species of the pinta tortoise is likely to be extinct You. In addition, George who died was subjected to autopsy, but it is known that he had a anatomical disease affecting the genital organs. Scientists have found that in the Galapagos Islands, 11 of the 115 animal species identified since the start of the record have already been extinct. One of the reasons that the Pinta and Espanola tortoises were driven to extinction was the overexploitation of food by whalers and pirates around the 19th century. These two species had smaller shells than other Galapagos tortoises and were easier to carry onboard, so they seemed to have been targeted. The captured turtles were alive on board and provided a source of fresh meat during the voyage. On the other hand, when the ship was in trouble, it was sometimes thrown out of the boat.

Records of eating giant tortoises include Charles Darwin, who has his own

laboratory in the Galapagos Islands. According to Darwin, 'We were completely harnessed by giant tortoises. Roasted meat is fresh and very delicious. Young tortoises are excellent soups.' Darwin also noted that giant tortoises had been overfished in 1839, stating that about 200,000 giant tortoises died during peak times.