This is a human ancestor, the existence of a bag-shaped creature with a huge mouth is reported 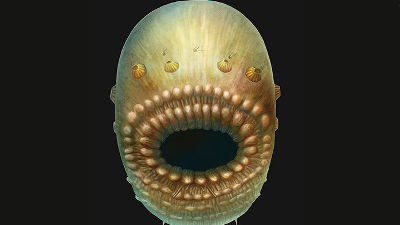 A research team at St. John's College reported a potential human ancestor who lived 450 million years ago. A creature with an oval body and a huge mouth is named 'Saccorhytus' after the word 'sack'.

A huge mouth and no anus – this could be our earliest known ancestor | Science | The Guardian
https://www.theguardian.com/science/2017/jan/30/huge-mouth-and-no-anus-earliest-known-ancestor-saccorhytus-coronarious-evolution

This is Saccorhytus. It has no eyes, and its huge mouth is lined with concentric protrusions, and it is presumed that it inhaled and ate creatures and particles. 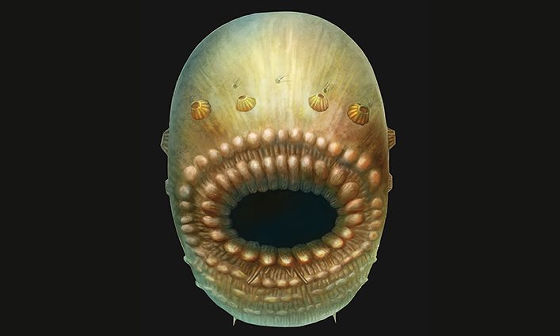 According to a paper published in Nature, researchers believe that Saccorhytus may be the ancestor of many evolutionary creatures such as vertebrates, echinoderms, and animals. The size of the Saccorhytus fossil found in China is less than 1 mm, but it is very well preserved and it was possible to observe the details. And from it the anus was not was observed with a microscope, the researchers that Saccorhytus was excreted from the mouth to eat from the mouth Deuterostome comes to the conclusion that belong to. Saccorhytus is believed to have lived between the sand grains on the seabed. 'To the naked eye, the fossils we studied looked like small black grains, but when viewed under a microscope, their fineness was amazing.' I think it's the beginning of the origin of living things, 'said Simon Conway Morris, who conducted the research.

All of the early deuterostome fossils discovered so far are only a few centimeters in size, and this is the first time that such a small fossil has been found. From this, it is possible that the oldest animals were invisiblely small.

According to the hypothesis of a molecular clock that compares molecular differences between organisms and estimates the age at which they diverged during evolution, it is thought that the difference in biomolecules increases as organisms branch and evolve. No fossils of early creatures matching the molecular clock have been found. Some researchers think that this is because the fossils are too small to be found, so Saccorhytus could also be a clue to solving the problems of molecular clocks.

Imran Rahman, a researcher at the Oxford University Museum of Natural History, said of Saccorhytus: 'It's a really interesting and amazing fossil. This fossil has great potential to deepen our understanding of the early evolution of posterior animals.' 'This fossil will be very important for us to understand the history of evolution,' he said.