A CPU, memory, Wi-Fi, etc. are mounted on a small board that can be pinched by the fingertip, and by combining the expansion module, it is possible to use it as a machine for IoT "Omega 2"Of the cloud funding siteKickstarterWe are seeking investment in.

It is easy to use specification that you can start immediately by turning on the power just by taking out the main body from the box and setting it in the module.

In addition, since Omega 2 can use the application, it is possible to operate as if it were a smartphone or a normal PC. Applications can be downloaded from a dedicated app store, of course, you can even program them yourself using the SDK. 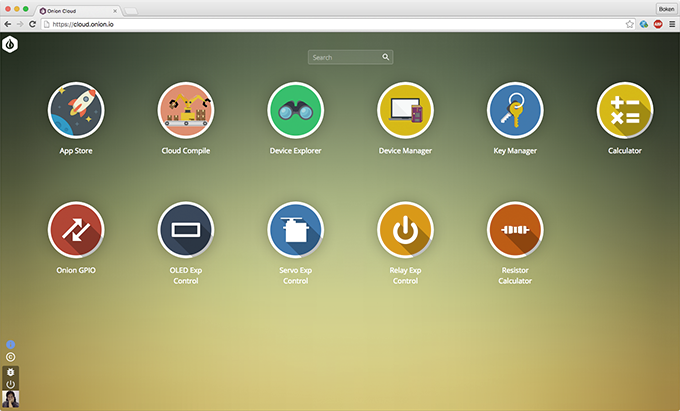 And, this small body has Linux. Since it supports the same OS as the ones used in the world, it is possible to realize functions comparable to others. It is also possible to run Apache, of course, so that we can also implement the function as a server.

Supporting main languages ​​such as Ruby, C ++, node.js, python, php and so on. It is possible to build an environment with a familiar language.

Omega 2 can be seamlessly integrated with the cloud service offered by vendor Onion. This function is handled as an option, but you can use the cloud function to control equipment via the network.

Omega 2 employs a modular method, and its function can be expanded by adding boards with each function mounted on the main body.

In addition to installing Wi-Fi onboard, it is also possible to incorporate a mobile phone network, Bluetooth, GPS function by adding a modular.

Because it has compatibility with Arduino as a standard product of my own microcomputer, it can be used by incorporating it in existing environment. By combining various sensors and others, it realizes lighting which turns on automatically by sensing human beings ......

It can also be used for studying programming.

Make your own mood light ...

You can also make your own media server using Wi-Fi function. It is also a unit for connecting to a smartphone to receive music and to play it on an external device. It can also be used for controlling self-made robots.

It can also be used as a relay that receives Wi-Fi radio waves and can deliver it even more extensively. Omega 2 is looking for investment with Kickstarter. For the target price of 15,000 dollars (about 1.5 million yen), about 2 million dollars (about 20 million yen) is gathered from more than 5,000 investors around the world at the time of article creation. There are also various modular expansion kits that add functions to Omega 2. "Expansion Dock" ($ 15: approx. 1,500 yen) is a module which becomes the basis of expansion, it is equipped with various IOs and is made to be able to connect with PC with USB cable.

"Power Dock" ($ 15: about 1500 yen) is a module for supplying power to USB via Omega 2 as its name suggests. Omega 2 can be driven with 3.3 V power supply, but by using Power Dock, it is possible to process the power supply more simply.

"OLED Expansion" ($ 15: approx. 1,500 yen) is a module equipped with a monochrome display device, allowing simple display of text and images.

"PWM Expansion" ($ 15: approx. 1,500 yen) is a module for generating pulse current to drive servo motors and others.

"Bluetooth Expansion" ($ 5: about 500 yen) is a dongle to add Bluetooth via the USB terminal. "Proto Expansion" ($ 5: about 500 yen) is a module that can be used as a universal board for making functions other than existing modules.

And if you add 3rd party module "Hologram" ($ 45: about 4500 yen), it becomes possible to connect to 3G telephone network, spreading the range of application at a stretch. The pin arrangement of Omega 2 looks something like this. The deadline for investment is Japan time on August 24, Wednesday, Wednesday, August 24, at 6:09 am, and shipping time is scheduled around November 2016. Shipping to Japan requires a shipping fee, but details are to be notified after Kickstarter's campaign is over.