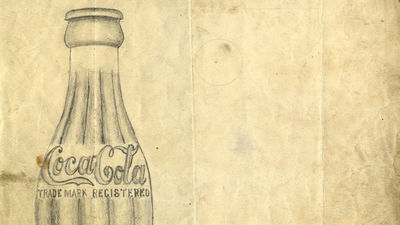 'Coca-Cola' sold by The Coca-Cola Company (hereinafter referred to as 'Coca-Cola') is the world's first cola drink, and it is a drink that everyone knows as much as you can see it anywhere in the world. As of 2015, most of them are sold in PET bottles and cans, but a decade ago, bottles were the mainstream. Quartz, an IT-related media, is approaching the secret story of how the Coca-Cola bottle design was born.

The History Behind the Coca-Cola Bottle: The Coca-Cola Company
http://www.coca-colacompany.com/stories/the-story-of-the-coca-cola-bottle/

In consideration of customer demand and portability, Coca-Cola introduced a machine to put cola in a bottle in 1894, and adopted the first bottle in the history of Coca-Cola as a container. Twenty years later, in 1915, the trademark 'Coca-Cola' was registered, and the company solicited a bottle design to clearly distinguish Coca-Cola from similar products such as Icoca Nora and Toca-Cola. I will decide.

The Coca-Cola bottle design competition won first place with a design team of five employees from a company called Root Glass Company in Indiana. The team adopted the cocoa fruit of the plant as the prototype of the bottle design. The design team thought that the elongated shape of the cacao fruit and the vertical pattern on the outer shell of the fruit were attractive. I'm wondering how the design team got to the fruit of cacao, and a Coca-Cola spokeswoman told Quartz that it happened when the design team was looking up the meaning of 'coca' in the library in a dictionary. He noticed the cacao listed near the Coca item and was attracted to the charm of its shape and pattern. 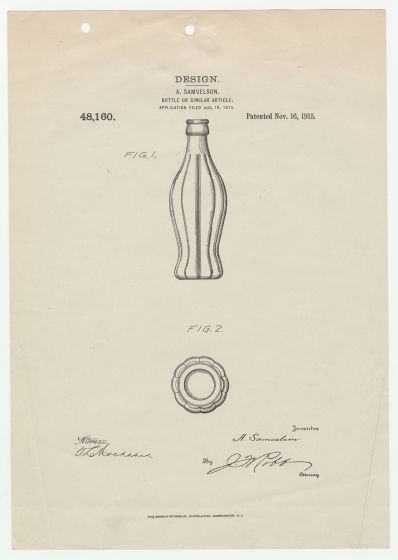 The bottle in the image below was designed based on the idea of the cacao fruit that I found by chance. The shape of the bulging center of the bottle and the vertical pattern are reminiscent of the fruit of cacao. In this way, the bottle design of Coca-Cola was decided, and after that, it was mass-produced and Coca-Cola became known not only in the United States but all over the world. 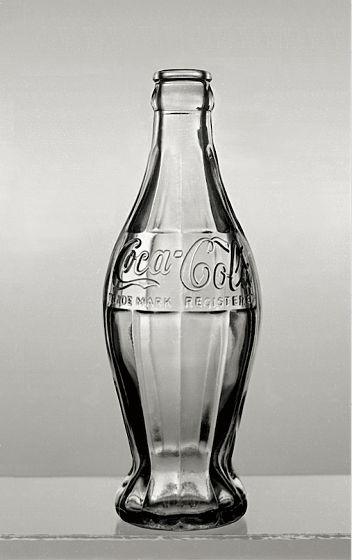 The first bottle manufactured after adopting the design of Root Glass Company was green, and it seems that it weighed more than 450 g with Coca-Cola, but this is so that it will not break when transported here and there. Because I used durable glass for durability. The design-adopted Root Glass Company has patented a bottle design, the original patent of which is on display at The National Archives in Washington, DC until December 2, 2015.

Quartz said, 'It's clear that the unprecedented bottle design succeeded in branding Coca-Cola. Also, Coca-Cola became a symbol of soft drinks because of the bottle design.' is.